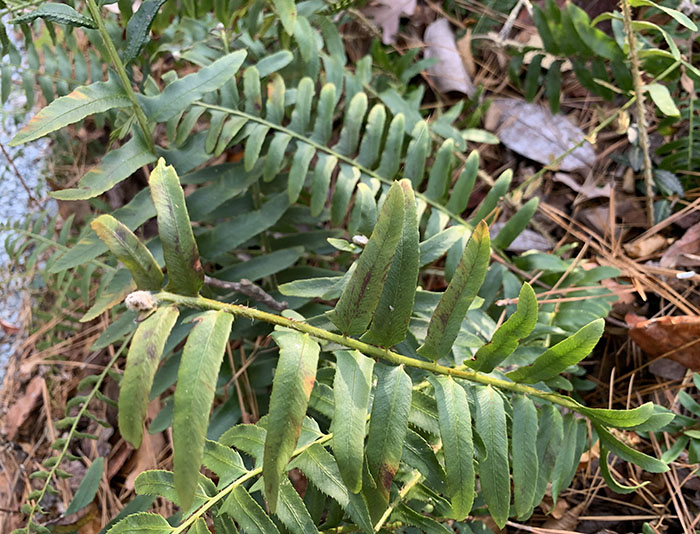 This common fern is one of the easiest native species to identify, thanks to its distinct evergreen fronds, which stand in sharp contrast against dominant grays and browns of the winter forest. Though named for their increased visibility during the holiday season, Christmas ferns also feature individual pinnae, or leaflets, that resemble stockings hung on the mantelpiece. While the undersides of many fronds are lined with button-shaped clusters of sporangia , which house the plant’s reproductive spores, most of these fertile fronds have died back by the winter, and only the sterile fronds remain.

Each spring, scaly new fronds emerge in dense coils known as “crosiers” or “fiddleheads”—not to be confused with the many species of edible ferns also known as fiddleheads in this stage. For most of the year, the fronds remain upright, but after the first severe frost, the surviving sterile fronds collapse to the ground. This traps the soil and surrounding leaf litter, allowing it to decompose in place, and it also prevents erosion. Instead of spreading through the forest, each individual clump remains in place and gradually increases in size.

Christmas fern is a tough and durable species, thriving in shady forests and shallow, rocky soils where less hardy species struggle to survive. Unlike many other ferns, it does not require constant moisture—indeed, poorly drained soils can result in crown rot and other fungal diseases— and it is often found on dry slopes and upland woods far from an immediate water source. Unpalatable to deer and rabbits, it flourishes in both wild and cultivated landscapes without special protection or care—a four-season gift to gardeners across central North Carolina