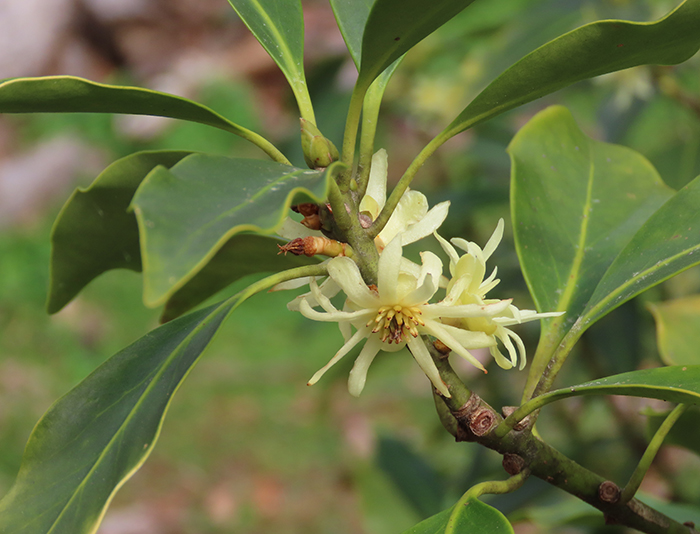 In this series, the staff of Duke Gardens highlights plants you’ll find within our 55-acre living collection. This week horticulturist Maegan Luckett features a quartet of native plants with intriguing common names. 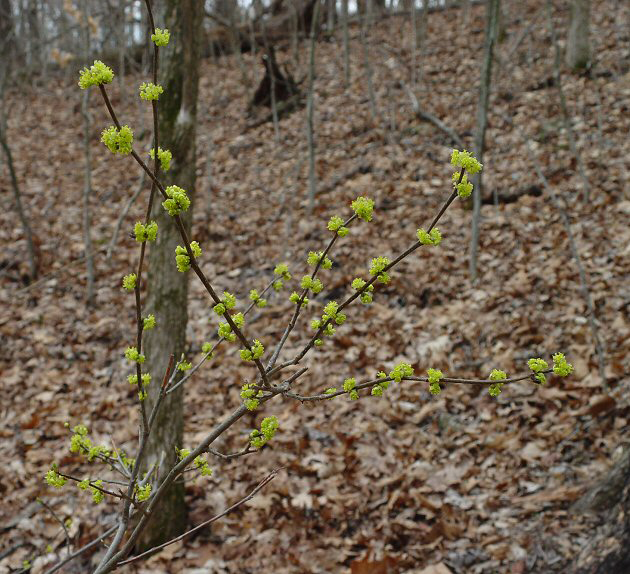 As I have gotten to know the plants of the southeastern United States, I couldn’t help but notice that several of our well-known natives have common names that allude to a type of spice or have the word “spice” in the name. I have wondered at the derivation of this for a while; have people used these plants in the past to enhance the flavors of cooked foods, as the names might suggest? This question led me to research the history of the following four plants: spicebush, Carolina allspice, anise tree and wild ginger.

First up is one of my favorites, Lindera benzoin, commonly called spicebush (right). It is a medium-sized nondescript deciduous shrub that I associate with the floodplains near rivers. Early in the spring, the bottomland comes alive with the bright yellow glow of spicebush flowers. The small red fruits that mature in the fall are attractive as well.

Apparently, in this case, the name “spicebush” is apt. I am led to understand that Cherokee and Chippewa people have used the leaves to disguise the flavor of strong or less than pleasant tasting meats. Cherokee people also have used the stems for a fragrant herbal tea. Early European colonists and settlers who were familiar with spices from Asia found the ground up dried berries (well, drupes, technically) to be a good substitute for allspice, but they did not use it in any other way. Later, after the Civil War, there is record of people of European descent and recently emancipated African Americans using it as both a spice and a tea. In addition to its culinary usage, as is the case with all the listed plants, there were medicinal uses for spicebush as well that I will not discuss here.

Speaking of allspice, the next plant of note is Calycanthus floridus (Carolina allspice or eastern sweetshrub, below). Carolina allspice is a deciduous shrub with a loose, suckering habit and interesting sweet-smelling dark maroon flowers. Carolina allspice is well known as an ornamental plant, with several floriferous cultivars. But is it also a culinary alternative for allspice as the name would suggest? As far as I can tell, no. Whilst Cherokee people have used the sweet-smelling flowers or bark as a fragrance, there are no references to anyone using it as an allspice alternative. However, there is a report of the roots, bark and leaves being used as a substitute for cinnamon. The seeds are toxic, though. Reportedly, in addition to using Carolina allspice as a perfume, Cherokee people also historically used the seeds to poison wolves!

Illicium parviflorum (yellow anise tree, above) is a large, suckering evergreen shrub that is resistant to deer and not particularly picky about growing conditions. Like Carolina allspice, Illicium is another native plant with ornamental applications. The cultivar ‘Florida Sunshine’ features striking yellow foliage and would look nice as a contrast in a mixed shrub border. Now the bad news: there is no culinary application for yellow anise tree. It is closely related to the Asian spice plant Illicium verum (star anise), but most sources I came across state that the seeds are toxic and should not be used as a substitute for star anise. 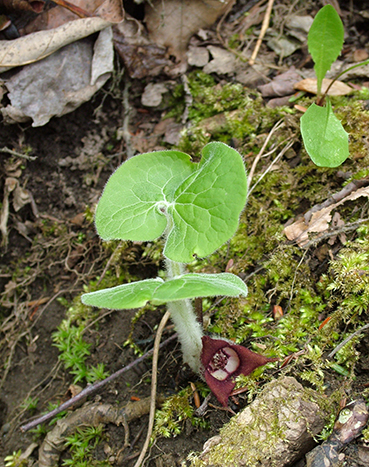 Wild ginger or “gingers,” as they are colloquially referred to, are a group of taxonomically confusing plants in the genus Asarum or Hexastylis. The most commonly seen ginger in the woods locally is Hexastylis arifolia (little brown jug). Considering the relative abundance of this plant, I assumed I would come across more ethnobotanical information about it. However, its relative Asarum canadense (Canadian wild ginger, left), which does grow in North Carolina but is generally distributed more northerly, has a much wider range of uses as a spice, as well as medicine, by Native Americans from geographically disparate areas. So, why is this group of plants called “gingers?” Most of the wild gingers are purported to have pleasant-scented rhizomes that may suggest the scent of culinary ginger (Zingiber officinale). I think it smells like licorice, personally, but to each their own. Interestingly, the rhizomes of all the species of Asarum and Hexastylis contain a potent kidney-damaging chemical called aristolochic acid. The wide historical use of Canadian wild ginger amongst Native American people suggests that perhaps they were adept at processing the plant in such a way as to render it less harmful or they were familiar with the proper volume of plant material to use to avoid harm.

Some examples of usage of Canadian wild ginger taken from The Native American Ethnobotany Database: "Chippewa people of the northern Great Plains area have historically used the rhizome in all cooked foods as a spice, or made a powder from the dried plants to sprinkle on clothing as a perfume. Other groups, such as the Meskwaki, Ojibwa, and Potawatomi people of the northern forests of the United States have used the rhizomes to season fish and other meats that were otherwise less palatable."

The use of culinary spices is so ubiquitous that we may rarely even consider where our spices come from geographically, let alone think much about the plants that produce them. The vast majority of the spices we use today comes from various parts of Asia, or Latin America in the case of chili peppers. Doubtless there are many local spice plants growing in our fields and forests, unrecognized. So, on your next walk in the woods, think about what the people indigenous to this area might have used to make their meals more enjoyable, or about our American forbears in times of scarcity turning to plants that they were not accustomed to. Might be worth looking into it, with caution, of course.

I think I am going to go try some spicebush tea now, if you’ll excuse me. 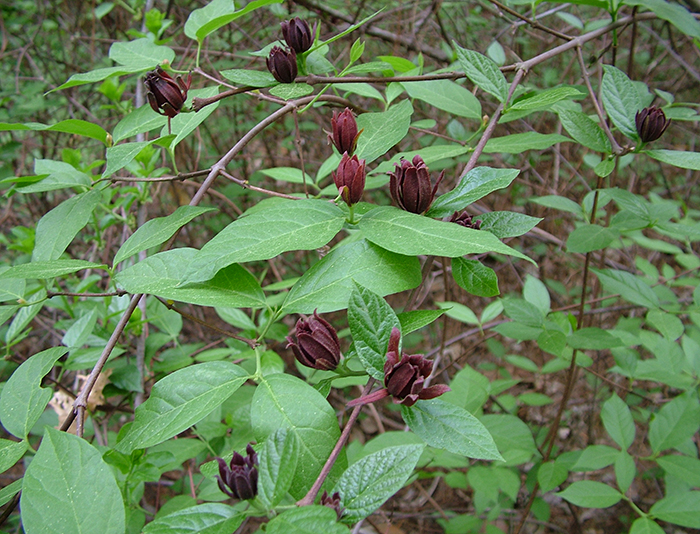