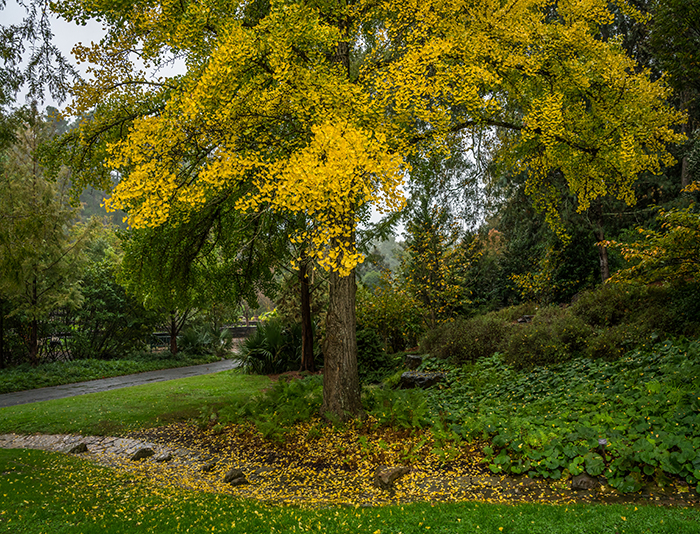 In this series, the staff of Duke Gardens highlights plants you’ll find within our 55-acre living collection. This week marketing and communications assistant Katherine Hale features a living fossil with a long and storied history 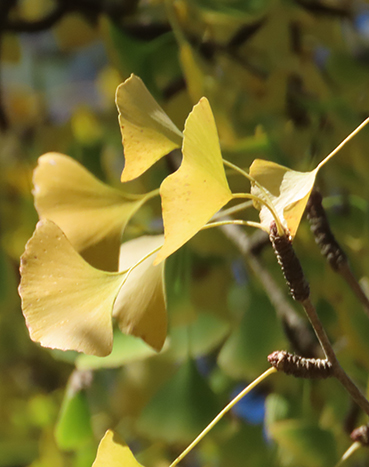 There’s no shortage of unusual plants here at Duke Gardens, but the ginkgo tree (Ginkgo biloba) might be the strangest of them all. With knobbly gray bark, short-spurred branches, and fan-shaped leaves with forking veins in lieu of the usual branching, net-like array, there’s nothing in the entire world quite like it.

This wasn’t always the case. Back when dinosaurs roamed the Earth, the ginkgo tree had dozens of relatives—all of which went extinct about 5 million years ago, except for the one species with us today. As with sharks and turtles, fossil evidence shows that modern ginkgos have changed relatively little from their ancestors—the evolutionary equivalent of “if it ain’t broke, don’t fix it.”

Although G. biloba and other ginkgo-like trees had a worldwide range in their heyday, their native range has shrunk considerably since then. Starting around 2 million years ago, G. biloba retreated to a small region of southwestern China, where a few scattered populations that may or may not be wild still persist.

However, unlike many rare and endangered species, ginkgos are in no danger of following the rest of their family into extinction, thanks to centuries of human cultivation. Some trees planted at temples in China and Japan are estimated to be more than a thousand years old. Millions more have been planted around the world, and you’ll find ginkgos along the streets of cities across North America and Europe, including Durham.

Ginkgos are in many ways the perfect tree: beautiful, long-lived, fast-growing, and highly adaptable. Unlike many introduced species, they rarely naturalize, and their unique biochemistry helps them withstand pest and disease attacks (though it also limits how many other species they can support). They are extremely tolerant of air pollution and soil compaction that would kill other trees, and they also tolerate deer, clay soils, disturbance and salt. Although ginkgo “seeds” are a delicacy in Asia, and extracts from ginkgo leaves are a popular folk remedy for memory loss and dementia, they are grown primarily as ornamentals in the West. They are especially cherished for their annual fall display of bright, butter yellow leaves that fall all at once. Because they leaf out late in the spring compared to other trees, ginkgos are a great choice for locations that need shade or screening in the summer and solar gain and clear views in the winter.

Ginkgos can reproduce from seed, sprout from buds near the base, or produce aerial roots on the underside of their branches, effectively self-cloning. However, you will rarely encounter the fleshy yellow “fruits” here at Duke Gardens, as most of our cultivars are male clones, and any fruits from the female tree near the dawn redwood are quickly harvested. If you do encounter a female tree, you’ll likely smell it before you see it—ginkgo “fruits” are notorious for their strong odor, which many people find offensive.

In these challenging times, ginkgos are an inspiring icon of resilience and survival. When everything around me is volatile and strange, the ginkgo trees remind me that they have survived devastating catastrophes over the millennia—mass extinctions, continental drift, even a nuclear blast. They are consummate survivors, and their long history is interwoven with the countless human beings who have cherished them across the centuries, including me and every other visitor to Duke Gardens who has paused to admire them. 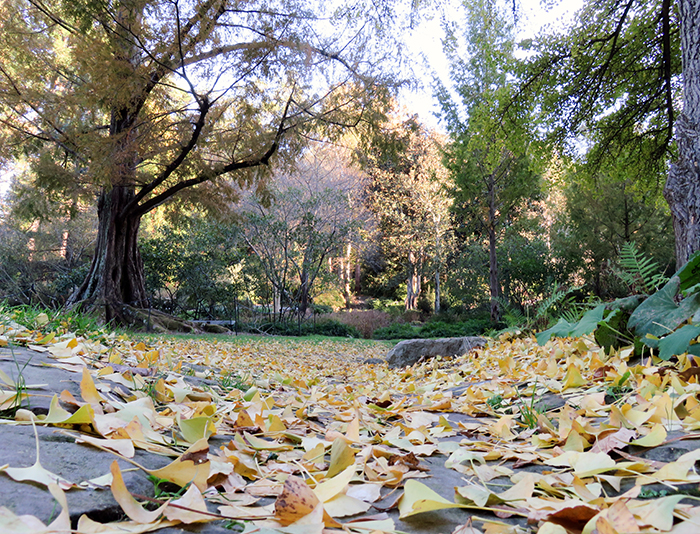