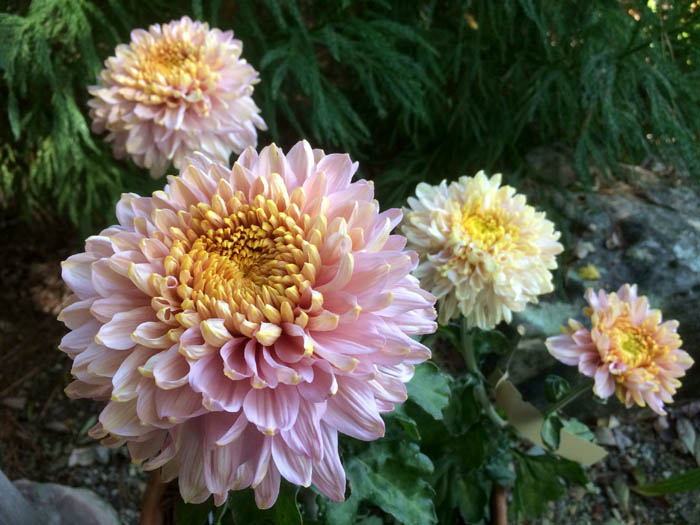 The Wonderful World of Chrysanthemums

Before I joined the Duke Gardens staff, my conception of the chrysanthemum was the bulbous potted plant my mom used to buy from the garden supercenter each fall—and subsequently make me deadhead, much to my chagrin. But several years ago, I stumbled upon the exhibition chrysanthemum show at Duke Gardens, and the flower that I had always considered to be the bridesmaid of the plant world suddenly became the bride.

I was blown away by the beauty and variety of the chrysanthemums on view: the seemingly innumerable pompon petals of large globular blooms; the delicate, threadlike spindles of the quill, spider and thistle varieties; the fluffy pincushion centers of anemone mums; and the daisy-like petals of single- and double-ray florets. Colors ranged from bright pink and orange to deep maroon and blue. These were true works of art that you really have to see to believe. 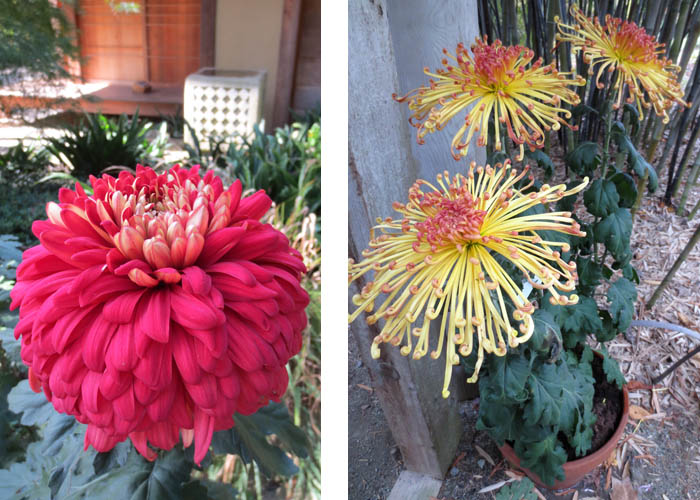 Indeed, growing exhibition chrysanthemums requires a great deal of artistry, and Duke Gardens is fortunate to have a gifted artist among its ranks, horticulturist Michelle Rawlins.

Michelle has worked in the Culberson Asiatic Arboretum for 18 years, but she is a relative newcomer to the world of exhibition mums. She was introduced to the art form seven years ago when she joined the newly formed Central Carolina Chrysanthemum Society.

It was a natural fit for her. Chrysanthemums are native to Asia and northeastern Europe and have long been cherished in China and Japan, featuring prominently not only in Asian gardens but also in art and culture. Michelle’s horticultural expertise and knowledge of Asian flora, combined with the sage advice she received from growers in the chrysanthemum society, provided a winning formula. Michelle entered one of her first exhibition mums in the North Carolina State Fair, a cultivar called ‘Golden Gate’, and she took home first prize.

As with most masterpieces, the process of growing exhibition mums takes time and dedication. Michelle begins in January by taking cuttings from plants and potting them to establish strong root systems. Roots are key during this initial stage; Michelle regularly cuts back plant growth above the soil so that growth is concentrated in the roots. In May, she moves the plants from the greenhouse to the nursery to capitalize on the sunlight, as mums thrive in full sun. 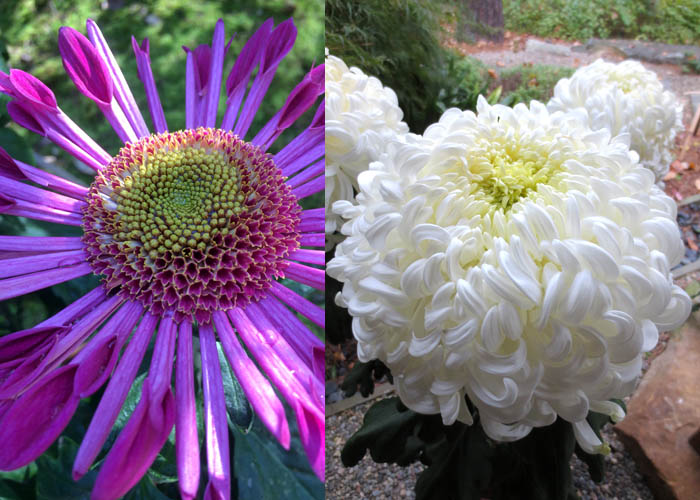 The real work begins in the summer. By July 1, the plants are typically around 2 feet tall, with multiple stems. If you let them grow “as is” at this stage, they would end up being 8 feet tall with shrub-like growth that cannot be supported by stakes—not what you want when your goal is to show the finished product in a 3-gallon pot! To that end, Michelle cuts each plant back to 6 inches in early July.

Around two to three weeks later, she chooses the three strongest stems on each plant, forming a triangle in the pot so that growth is well distributed, and she removes all other stems. She then supports the stems with bamboo stakes. From this point on, each plant must be tied to the stake on a weekly basis, as well as frequently pruned so that any laterals—the stems that emerge from leaf axils as the plant grows—are removed. This enables the plant to concentrate growth on the large-scale blooms that characterize exhibition mums. That’s easier said than done in July and August, when mums grow quickly because of the sun, water and fertilizer they readily consume. One pot takes around 10 to 15 minutes to stake and prune. Michelle has scores of pots. Maintenance is quite an undertaking.

In early September, buds begin to form, although full bloom is still about a month and a half away. With so many petals to open up, mums take their time to flower, and they will often surprise you. You may think a mum is in full bloom because of the sheer volume of its petals, but two to three weeks later they are even fuller.

The peak blooming season typically runs from late September to Thanksgiving, with early, middle and late bloomers making appearances throughout the fall. During this time, Michelle displays her masterpieces in clay pots throughout the Asiatic Arboretum and beyond, akin to the way chrysanthemums are traditionally displayed in Asian gardens. This year, she has placed many of the mums along the main accessible pathway in the Japanese Garden so that visitors of all abilities can enjoy them. There will also be a few in unexpected locations. “You’ll turn a corner and be pleasantly surprised by what you see,” Michelle explains. It’s worth a journey through the Asiatic Arboretum to see what lies in store.

She also often enters some of her best mums in shows, including “A Festival of Fabulous Mums,” which Duke Gardens presents in collaboration with the Central Carolina Chrysanthemum Society and runs from from Thursday to Saturday, Oct. 27-29, 2022, in the Culberson Asiatic Arboretum. The festival is entirely outdoors and free to attend, though university parking fees apply. If you'd like to learn more while you admire the diverse array of blooms, Michelle will also lead three fee-based mum festival walking tours. Please see our fall programs roster for information or to register for a tour.

For Michelle, these shows are not just about showcasing the hard-earned fruits of her labor. They are crucial platforms to promote the preservation of exhibition chrysanthemums.

“It’s a dying art form because there are so few people who do it,” Michelle says. The National Chrysanthemum Society only has around 450 members across the U.S.

There is also the issue of supply. In the United States, King’s Mums, located in Oklahoma, is the only vendor that sells exhibition mum varieties nationwide. Many cultivars are not even available for sale; growers rely on cuttings from friends. “You say to yourself, ‘If I stop growing this, will it die altogether?’ " she says. “It’s a scary thought.”

But Michelle and the 75 members of the Central Carolina Chrysanthemum Society are working to change that, one mum at a time. They are willing to share cuttings with anyone interested in growing them.

Michelle assures me that even a novice like me can grow these beauties. “They are actually not a hard plant to grow,” she says. “You can start with four tried and true cultivars, put them in your garden and see what happens. You can easily plant them in the ground, which a lot of people don’t realize. They are actually hardier in the ground. As long as you have a lot of sun and a water source, you can grow mums.” Just don’t over water—that’s like signing a mum’s death warrant.

Michelle has inspired me to give mums a try, and I can’t wait to share the growing process with my children, to pass on this great tradition to the next generation and show them the incredible beauty that emerges when people and plants work together.

Horticulturist Michelle Rawlins is originally from Minnesota. She graduated from the University of Wisconsin – River Falls with a degree in public horticulture in 2004 and will celebrate her 19-year anniversary at Duke Gardens in January 2023. Thank you, Michelle! 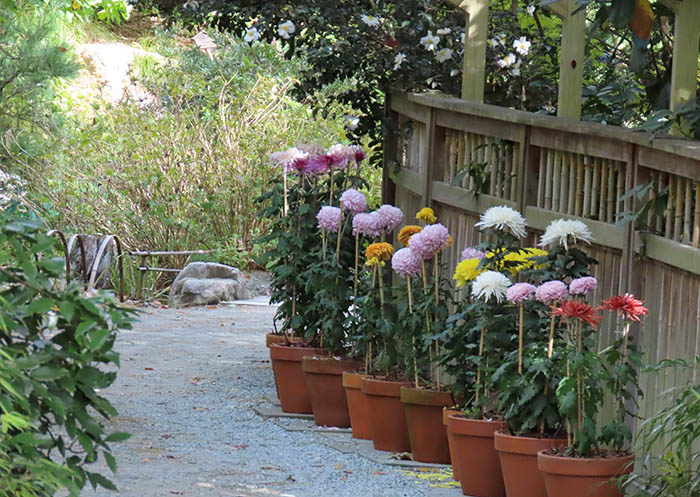