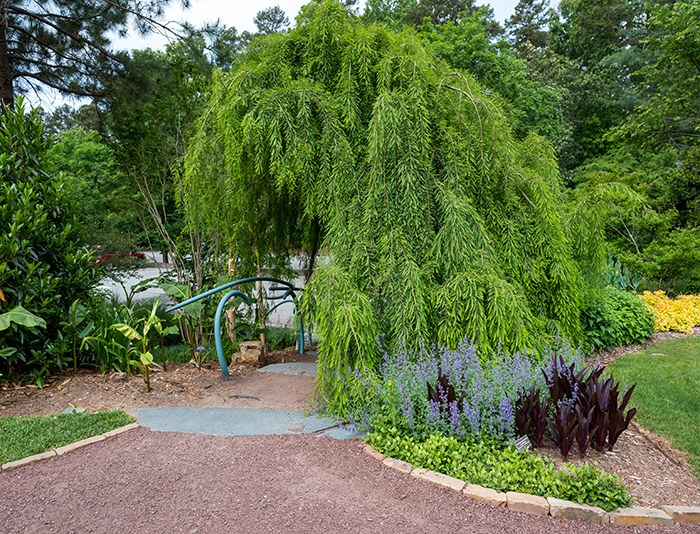 In this series, the staff of Duke Gardens highlights plants you’ll find within our 55-acre living collection. This week, marketing and communications assistant Katherine Hale features a living, growing sculpture that doubles as a shady shelter. 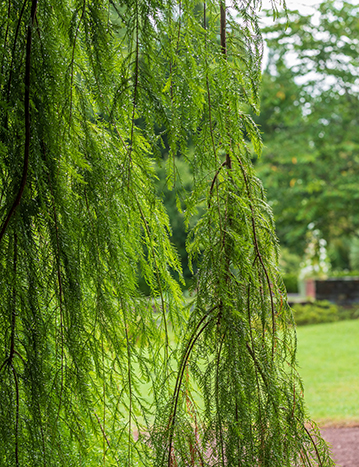 How do you turn a tree into a living shelter? With patience, luck, care and, of course, the right plant. Witness the results for yourself outside the Doris Duke Center, where curator Jason Holmes has gradually transformed a weeping bald cypress (Taxodium distichum ‘Cascade Falls’) into a unique spot to linger beneath a feathery green canopy.

In the wild, bald cypresses are sturdy trees native to swamps and marshes throughout the southeastern United States, known for both their great size and their toughness and adaptability. Calling them “the redwoods of the east” is hardly an exaggeration—bald cypresses are consistently the biggest and oldest trees remaining in the region, with one individual near Williamsburg, Virginia, topping out at 145 feet, and another along the Black River in coastal North Carolina thought to be 2,624 years old.

While most bald cypresses take on a pyramidal form as they age, ‘Cascade Falls’ bucks the trend by “weeping,” or sprawling across the ground instead of reaching upward for the sunlight. This mutation occurs in a wide variety of plants—sometimes spontaneously on a branch or shoot of an otherwise normal tree and sometimes in a young seedling—and usually can only be propagated through additional cloning in the hands of a skilled horticulturist. In the case of ‘Cascade Falls', the tree was discovered in the early 2000s as a chance seedling along the shores of a lake in Auckland, New Zealand, where it was propagated at a local nursery before eventually being introduced back to the United States.

‘Cascade Falls’ is as sturdy and reliable as its wild brethren; unlike them, however, it is relatively compact, with pendulous branches that dangle to the ground. Because of its unusual growth habit, ‘Cascade Falls’ is typically grafted to an ordinary bald cypress seedling at the desired height, allowing its branches to spill downwards from an established height. Otherwise, it must be staked or tied to an arbor or a trellis to gain altitude; left to its own devices, the plant would collapse and form a dense ground cover. These characteristics make ‘Cascade Falls’ a perfect choice for living shelters, which are carefully sculpted over time to create a beautiful place to rest and savor the garden.

In addition to the specimen in the Doris Duke Center Gardens, you’ll find several of these trees growing across a lattice to form a shady archway above a bench by the water fountain at the base of the Terrace Gardens, which provide a much-needed respite from the heat on hot summer days.  Meanwhile, you’ll find wild-type bald cypresses along the ponds in the South Lawn and the Culberson Asiatic Arboretum, which provide a different kind of shelter—along with a vivid demonstration of the adaptability and malleability of plants. 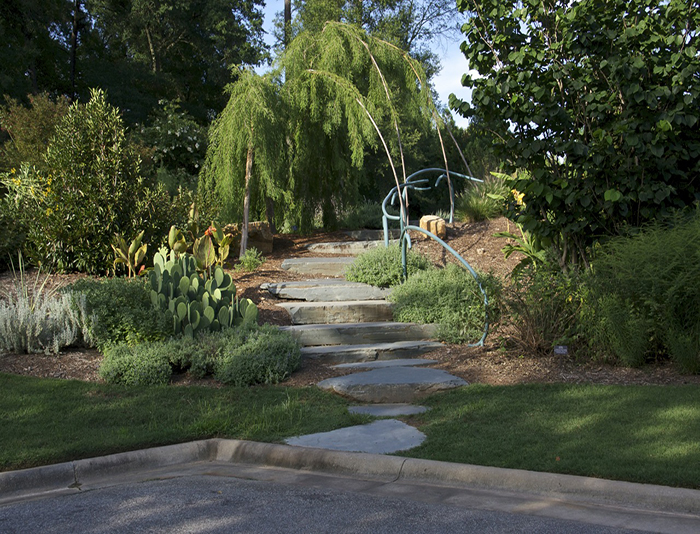