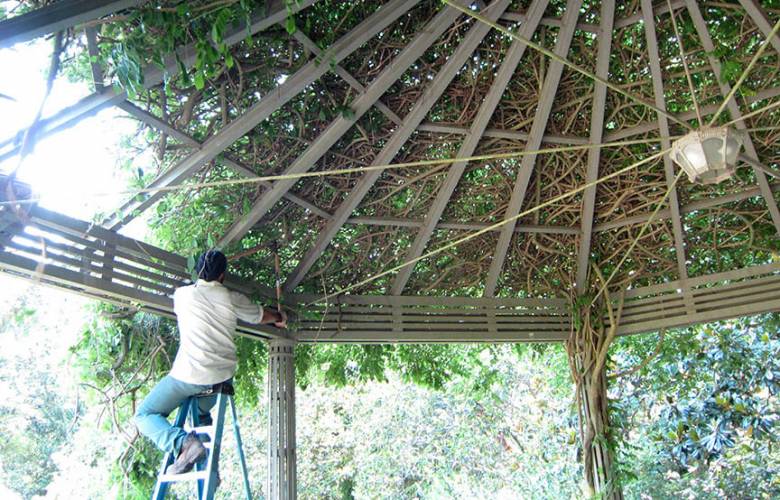 Workers remove wisteria from the iconic pergola in the Terrace Gardens, in order to restore the pergola and plant a more sustainable native wisteria in its place. Photo by Orla Swift. 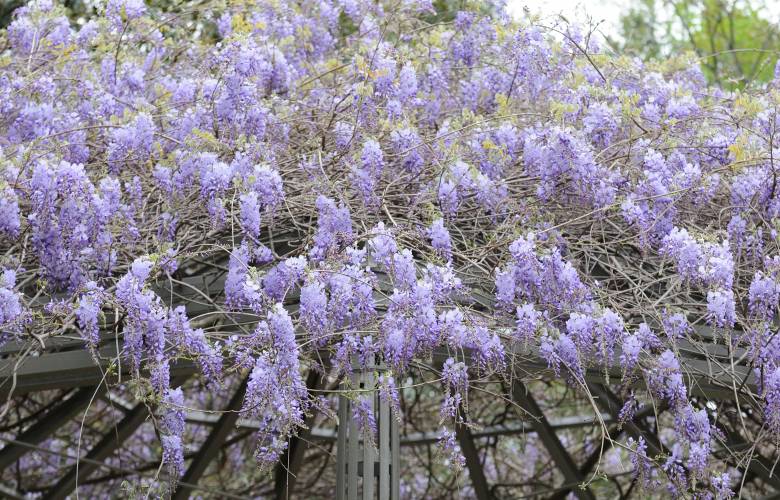 The restoration of the historic pergola will include planting native wisteria in place of the invasive Chinese wisteria shown above. Photo by Robert Ayers. 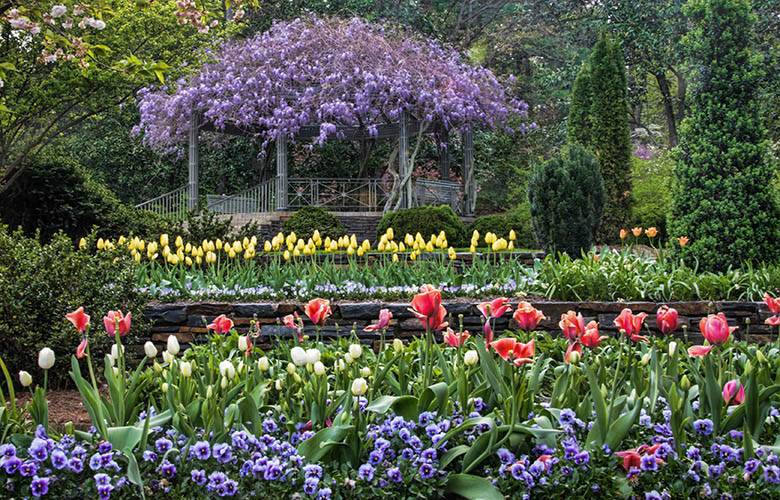 The restoration of the historic pergola should bring it back to its picture-perfect glory. Photo by Rick Fisher. 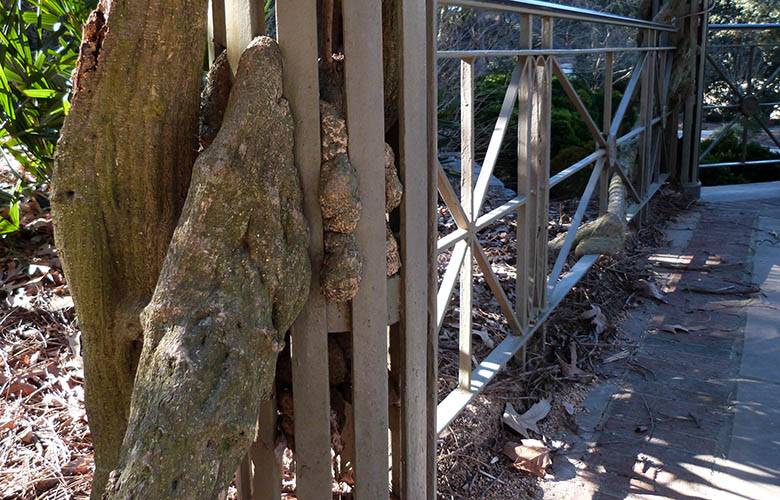 Wisteria winding through the metal pergola supports had hurt the plant's blooming ability, as well as the structure itself. The  native wisteria to be planted in its place will be trained to go around - not through - the pergola's supports. Photo by Bobby Mottern. 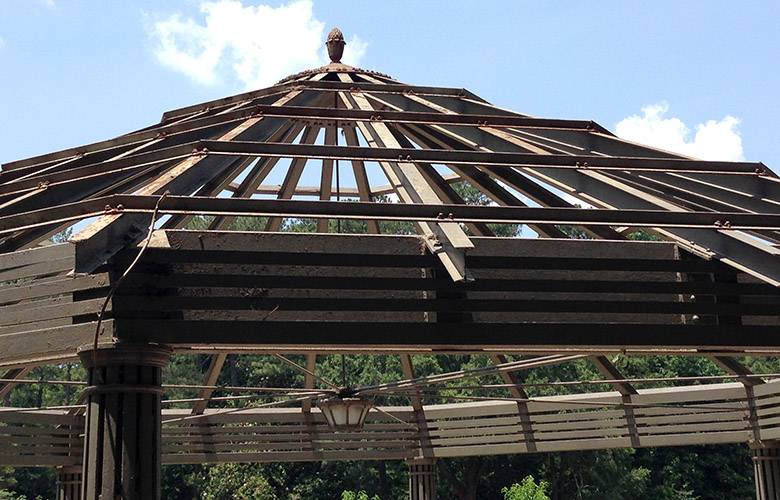 The pergola after wisteria removal was completed, revealing the fineal in the shape of a pineapple, the international "welcome" symbol. Photo by Bill LeFevre. 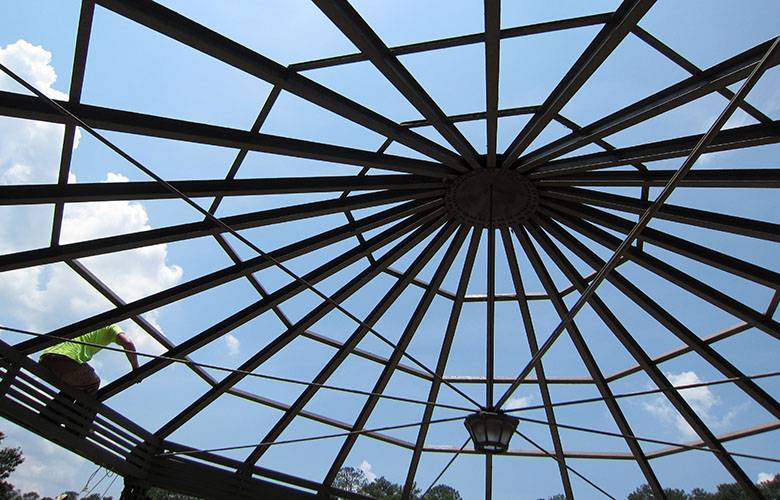 A worker removes the last of the wisteria from the pergola. Photo by Orla Swift. 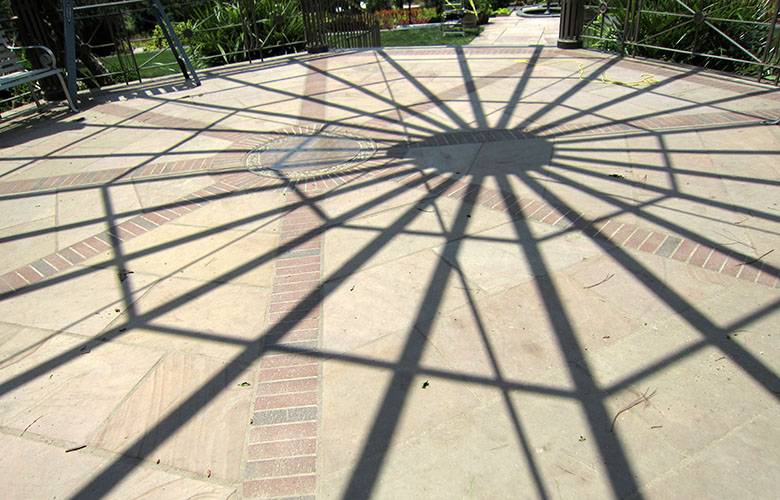 The removal of the wisteria has made for an interesting play of shadows below. Photo by Orla Swift. 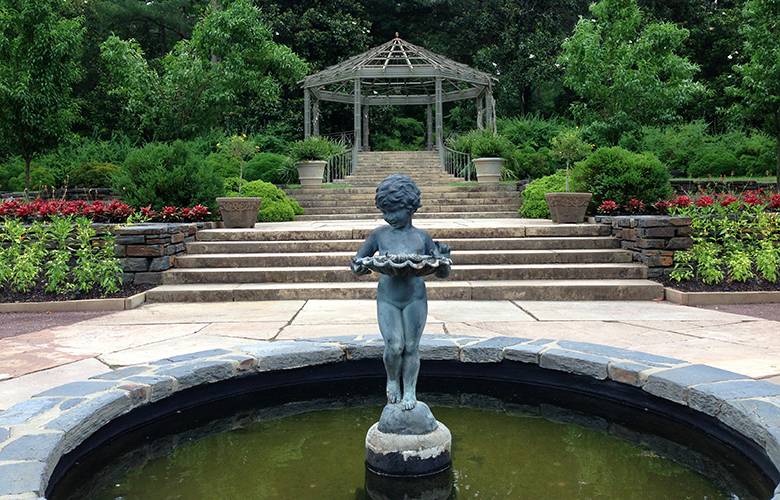 With the original Chinese wisteria removed, the iconic pergola was restored over the summer. Native wisteria to be planted in its place this fall will take several years to fully mature. Photo by Bill LeFevre.

Wondering why the wisteria was removed from the 75-year-old pergola in the Terrace Gardens? This article by horticulture director Bobby Mottern will shed light on the removal of this iconic vine and its replacement with a  sustainable native species.

The Terrace Gardens are one of the most popular destinations in Duke Gardens.  Each April, people flock there to enjoy the dazzling display of bulbs, cherry trees and the Pergola’s iconic wisteria.

In May 2014, Sarah P. Duke Gardens celebrated the 75th anniversary of its dedication in 1939. We then began a project focused on restoring the pergola’s metal frame structure as well as replanting a new wisteria vine to crown it.

This important restoration was made possible largely by the Duke Campus Club, which chose the project in celebration of its own centennial.

In her original plan for the terraces, landscape architect Ellen Shipman specified a flowering vine to adorn the pergola. She chose Chinese wisteria (Wisteria sinensis). It was planted most likely in the fall of 1938 or winter of 1939, when the majority of the terrace plantings were installed.

Chinese wisteria was first introduced to the U.S. in 1816 to support the nascent horticulture trade. With its fast growth and long trailing racemes of lilac-colored flowers, it became a very popular vine for shade and fragrance, used primarily adjacent to porches, on gazebos and rambling down fences in the Victorian landscape.

Unfortunately, its beauty belied its aggressiveness, and as with many introduced plants, its hostile tendencies were not realized for many years after its introduction. Over two centuries it has escaped to areas throughout the South, and it frequently climbs 50 to 75 feet high, engulfing trees, houses and anything else in its path. Because of this aggressive nature, this wisteria is on invasive plant lists from Virginia to Texas.

The restoration of the pergola, which required cutting back the vines in order to access the metal structure itself, presented an ideal opportunity to reconsider our wisteria species selection.The Chinese wisteria had not been blooming healthily in recent years, in part because of its age and also because it had wound its way between narrow slots in the metal ages ago, choking itself as it grew wider over the decades.

None of the less invasive alternatives, including the native Wisteria frutescens, was deemed to equal the outstanding floral display of the original. So initially we had intended to simply cut back the Chinese wisteria and control it strictly as it regrew. However, in light of our recent strategic planning process, which includes the goal to embody environmental sustainability throughout Duke Gardens operations, we have reversed our course and will replace the Chinese wisteria with the non-invasive native species.

The new vines will take several years to grow. But when they mature, we expect the purple blooms to look gorgeous and as photogenic as ever. We hope you will enjoy watching the regrowth, in person or in photos, and that you are pleased to know that this iconic beauty now serves as yet another example of Duke University's and Duke Gardens' commitment to sustainability.