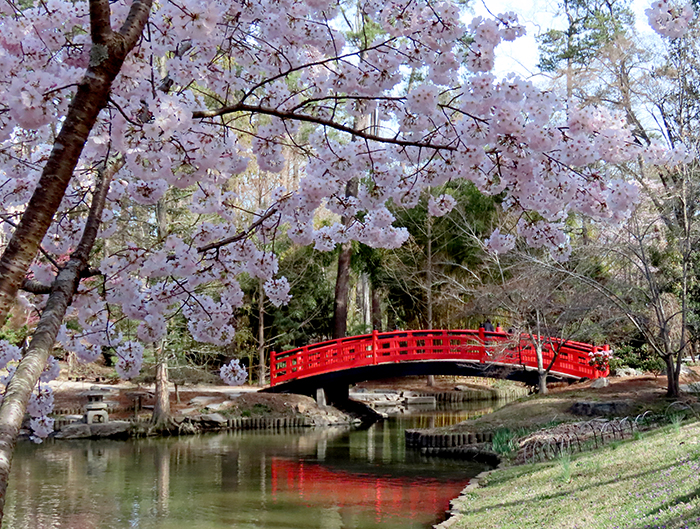 Sarah P. Duke Gardens’ iconic red bridge has been named the Meyer Bridge by the Duke University Board of Trustees, in memory of the late J. Horst Meyer, a Duke physics professor and beloved friend of Duke Gardens.

A highly regarded physicist who taught at Duke for more than 50 years, Meyer died in 2016 at age 90. From his arrival at Duke through the end of his life, he was an enthusiastic friend and supporter of Duke Gardens, as a founding board member, generous donor and frequent visitor.

“The Duke Gardens we enjoy today was profoundly impacted by the leadership and vision of Horst Meyer,” says Bill LeFevre, executive director of Duke Gardens. “And for that, we and the entire Duke and Durham community are eternally grateful.”

The bridge is located over the large pond in the Culberson Asiatic Arboretum and is a favorite spot for visitors to pause for photos and gaze at the beauty around them. It was recently redesigned, along with the surrounding landscape, to become the official entrance to the Durham-Toyama Sister Cities Japanese Pavilion and Garden, and to Pine Clouds Mountain Stream. Those features now compose the Ruth Mary Meyer Japanese Garden, named by the Duke Board of Trustees in honor of Horst Meyer’s late wife, who shared his deep love for Duke Gardens. 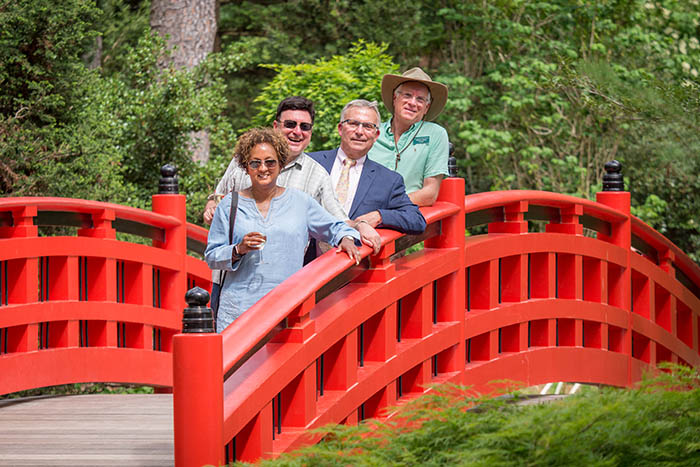 Meyer’s son Christopher Meyer and Christopher’s wife, Simone, attended a dedication celebration at the bridge on May 3, 2019, along with members of the Duke Gardens Board of Advisors and Duke University Executive Vice President Tallman Trask III. Later, Christopher Meyer reminisced about his father.

“As long as I can remember, my parents were admirers of Duke Gardens, and I can recall them taking me there on many weekends,” he said. “In the summer of 1979, they lived in Tokyo for three months as my father worked with a colleague on a research project. It was their first time visiting Japan and they fell in love with the beauty and serenity of Japanese gardens. They thought it would be wonderful if Duke Gardens included some Japanese garden features, and so they offered to contribute a Japanese bridge to go over the duck pond.

“The period during which the bridge was built was probably the most difficult time of my parents’ life,” he said. “They had just learned that my brother Richard had become terminally ill and they were seeing his health rapidly deteriorate. Watching the building of this beautiful bridge helped them tremendously with their grief and anxiety. After Richard passed away, my parents made another contribution to the Gardens in his memory: a Japanese lantern located on a rock in the pond near the western base of the bridge. The lantern is a perfect complement for the bridge, and they are often photographed together. Whenever I see them, I can’t help but think of their significance in my parents’ lives.” 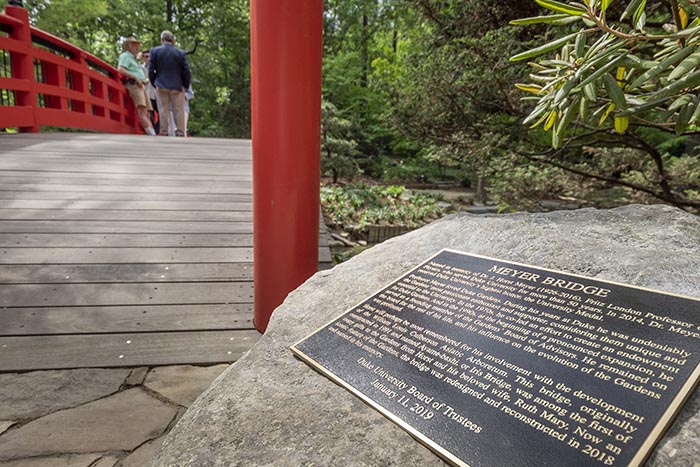 When LeFevre came to Duke Gardens as executive director in 2007, he was immediately struck by Meyer’s unflagging dedication and enthusiasm for all aspects of Duke Gardens. Meyer called the Gardens “a little piece of heaven” that induced a happy and grateful state of mind for him ever since he arrived at Duke as a young professor in 1959, LeFevre recalls. In the 1970s, Meyer co-led an effort to create an endowment for Duke Gardens. And in the 1990s, at the beginning of a pronounced expansion, he became a founding member of the Gardens’ Board of Advisors. He served on the board for the rest of his life.

Paul Jones, founding curator of the Culberson Asiatic Arboretum, spent countless hours with Meyer over the decades, and the two became close friends and collaborators.

“For many years I had the pleasure of somewhat routinely power-walking the arboretum with Horst, often early in the morning as a start to his workday,” Jones says. “On these occasions we would typically discuss new ideas, sometimes mine, sometimes his—though he never imposed. At the end of these walks he would always say, with a gentle insistence, 'You let me know what you need?!' ”

Meyer made large gifts to Duke Gardens. But he was also attentive to smaller needs.

“If we needed new or additional trash cans—he provided funds,” Jones says. “A mower—he gave a mower. A camellia collection, waterfowl, an Asian-styled bridge for the newly developing arboretum, a path to honor a friend—these too he provided, and always expressing delight in doing so, never reluctance.

“It is said that to whom much is given, from that person much is expected,” Jones says. “By my accounting, Horst Meyer greatly exceeded expectations.” 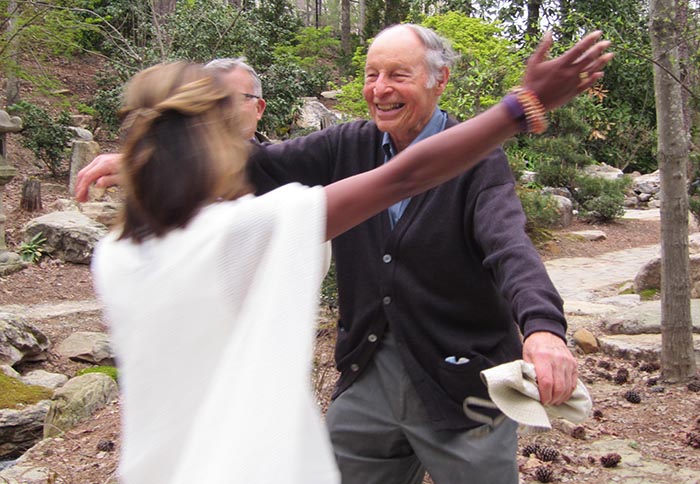 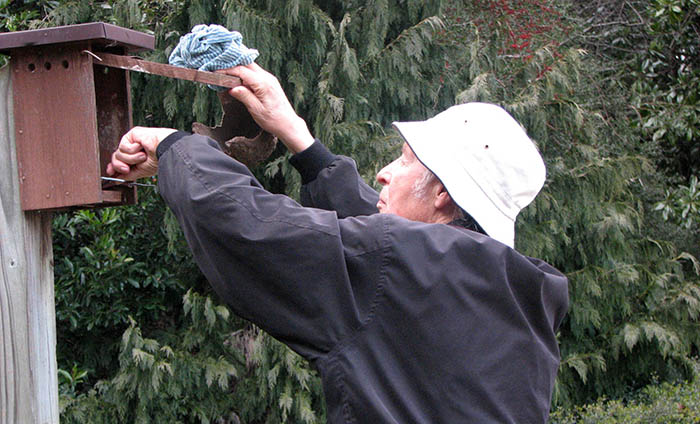 Meyer purchased and placed bluebird boxes throughout Duke University, then devotedly maintained them all. 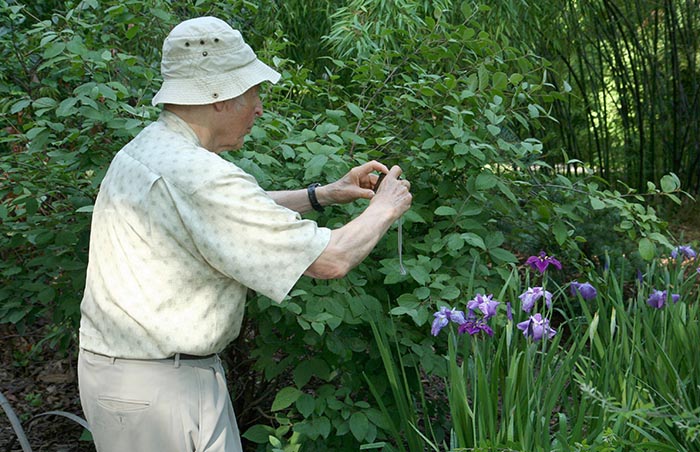 Meyer loved to photograph nature's beauty at Duke Gardens and beyond.