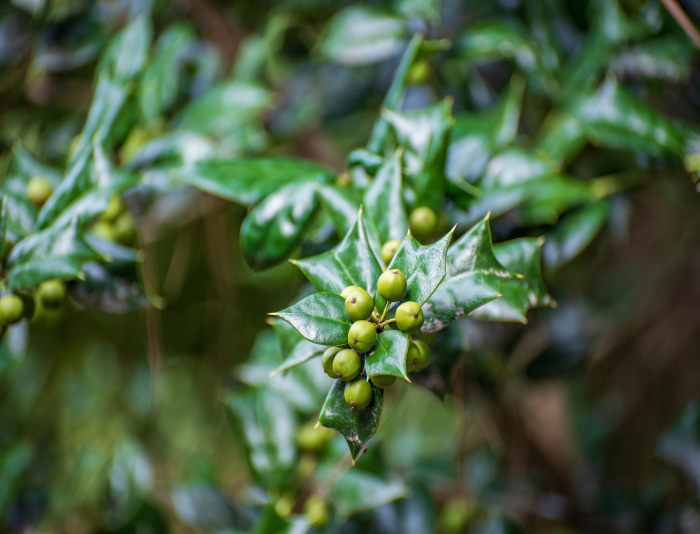 The winter holidays are upon us, and one of the harbingers of this festive time is the multitude of Christmas tree purveyors along the roadsides. Any visiting aliens might rightly question why humans bring freshly cut evergreen trees and other winter greenery such as holly, ivy and mistletoe into their homes at this time of year and no other.

"Tradition" is one answer. Another is that the aroma of freshly-cut fir stimulates the senses and arouses memories of happy times, the love of family and sharing of gifts. Both explanations may be true, but they are far from the whole story.

The custom of decorating homes with evergreen plants in mid-winter is a practice that pre-dates Christmas and Christianity. Our Neolithic ancestors considered evergreen plants to be sacred symbols of fertility representing everlasting life, worthy of reverence and celebration during the darkest time of year. Mid-winter and the winter solstice—the shortest day of the year, or December 21st in our calendar—are observed and celebrated by many cultures around the world.

In times when there were no satellites, watches or calendars, people monitored the movement of the sun throughout the year, sometimes by creating huge astronomical clocks to help them. The most famous of these devices is Stonehenge, built more than 5000 years agon and still standing in southern England. The goal was to know when the sun would return after a long, hard winter—i.e, when the days would start to get longer again. This was especially reassuring in higher latitudes, such as Scandinavia, where the sun might disappear entirely by December.

Regardless of where you live on Earth, the sun brings warmth, light and rebirth. As starvation was common in ancient times, it comes as no surprise that there were so many sun gods linked to mid-winter.

One of the most well-known celebrations was Saturnalia, held in ancient Rome two weeks prior to the winter solstice. This was a celebration to give praise to Saturn, the god representing renewal, agriculture and plenty. The new wine was ready to drink, and animals were slaughtered as it would be difficult to keep them alive during the long winter, so it was a time to feast and share gifts, to celebrate before the onslaught of the tough winter. At Saturnalia the Romans decked their houses with holly for good luck. The festival of Saturnalia’s days was ended in the 4th century CE, when the Christian Church introduced December 25th as the day of Christ’s birth, which helped suppress this "pagan"  festival while simultaneously adopting many of its customs. 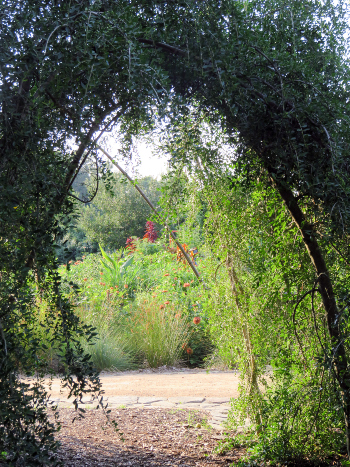 Not to be outdone by the Romans, the Scandinavian and Germanic tribes in Northern Europe celebrated Yule, an 11-day festival that fell between November and January, which was later incorporated into the Christian calendar as Yuletide. Their descendants began the custom of decorating fir or pine trees with lights. The German Prince Albert, husband to Queen Victoria, introduced this custom to Britain during the 19th century, and it rapidly gained popularity in America as well.

This brings us back to the Christmas trees that pop up along the roadsides each year nowadays. North Carolina is the second largest Christmas tree producing state in the U.S., cutting an astonishing 4 million trees each winter, which find their way into homes across the country. Approximately 94% of these trees are the Fraser fir, Abies fraseri, native to the snowy high ridges of the southeastern Appalachians. However, before this species was cultivated on a wide scale, people used whatever local evergreen species were common in their area.

Of all seasonal greenery, the hollies (genus Ilex) have always been of special significance. The shiny dark green leaves of the evergreen species stand out against the background of white snow or brown leaves in the winter landscape. All species boast vibrant berries that stand out in the otherwise barren woods—many the bright crimson color of blood.

A rich tradition of using holly to ward off evil spirits was popular in Europe for centuries, despite only one species, I. aquifolium, being native to the continent. Holly trees were grown close to homes to keep evil away, and they were incorporated into hedges to stop witches from running across their tops. Author J.K. Rowling nodded to this heritage when she gave boy wizard Harry Potter a wand crafted from a holly branch. And of course, people have “decked the halls” with holly for centuries, a practice beginning with the Romans.

In the southeastern U.S. there are more than 15 species of native hollies, a fraction of the 480 species growing throughout the world. The largest is the spiky evergreen American holly, Ilex opaca, which can reach up to 60 feet and grows in full sun or partial shade. One of the most attractive is the winterberry (Ilex verticillata), which is deciduous and carries many bright red berries on its branches throughout the winter. It grows best in full sun in moist, free-draining soil. In general, native hollies are quite slow growing compared to other shrubs, but they're worth the wait.

Many Native American tribes in the Americas had their own customs that included hollies. The black tea made from the leaves of the yaupon holly (Ilex vomitoria) was part of many ceremonial rituals of Native American tribes, including the Cherokee, as American naturalist William Bartram noted during his travels in the late 18th century. This species was used to make a black tea-like drink rich in caffeine. When drunk in large quantities, it can prompt vomiting, so it was used as a form of purification in ceremonies by high-ranking men. Both yaupon and its better-known tropical cousin yerba mate (Ilex paraguariensis) have grown in popularity in recent years as coffee alternatives. In addition to its culinary uses, yaupon is also an attractive holly to have in the landscape.

Individual hollies are monoecious, meaning they produce only male or only female flowers. Female trees produce the berries, but at least one male must be nearby to supply the pollen. Evergreen species make excellent hedges, while deciduous species are perfect for wildlife or woodland gardens.

So with each holiday season, hang the holly wreaths and look forward to the sun returning to the land. 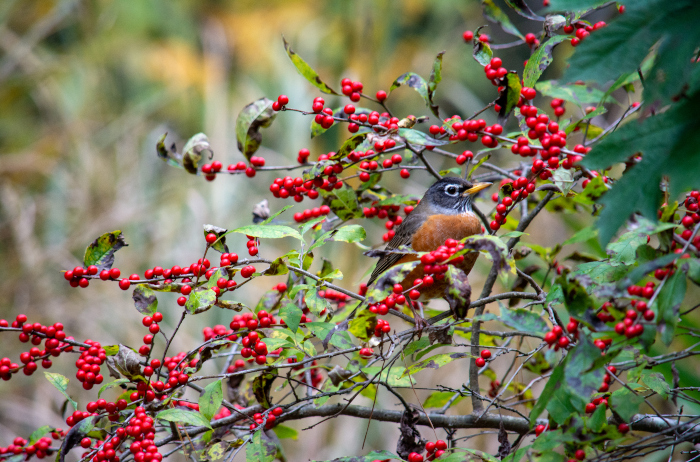 Photos from top: Immature berries of a horticultural hybrid holly in the Historic Gardens (photo by Cathi Bodine); Annabel portrait (by Rick Fisher); an arbor of yaupon holly (Ilex vomitoria) in the Charlotte Brody Discovery Garden (by Lori Sullivan); an American robin perched on winterberry holly (Ilex verticillata) in the Blomquist Garden of Native Plants (by Cathi Bodine).