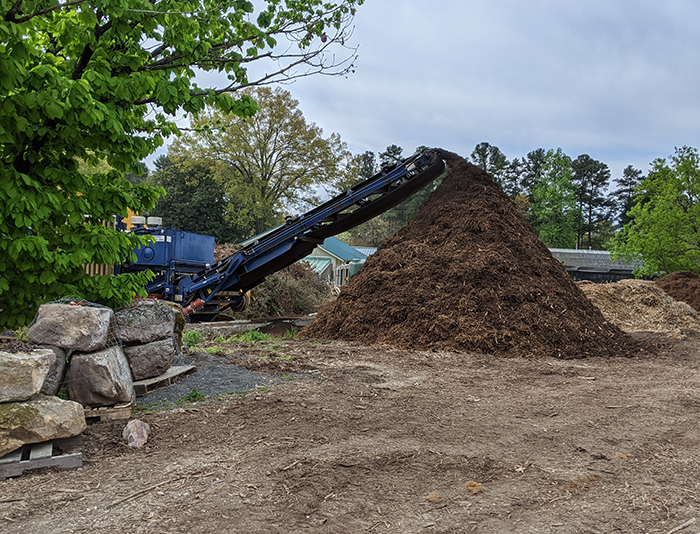 In this series, the staff of Duke Gardens highlights plants you’ll find within our 55-acre living collection. This week Jason Holmes, curator of the Doris Duke Center Gardens, and assistant horticulturist Nick Schwab discuss their creative solution to the perennial problem of plant waste.

How do you turn trash into treasure? As Sarah P. Duke Gardens has grown over the years, our landscape waste has grown with it. Each year, we receive roughly 2,500 yards of landscape debris — enough to fill Coach K Court inside Cameron Indoor Stadium with a 14-foot-high pile of green waste! Not only were downed trees, brush and landscape clippings building up faster and faster, Duke Gardens was spending $18,000 each year for debris removal alone — not including the mulch and compost we had to purchase to maintain this beautiful 55-acre garden. There had to be a smarter approach in dealing with this waste.

In 2017, Duke Gardens committed to building a composting program that would eliminate nearly 100% of the landscape debris hauled to landfills. The two of us, along with director of horticulture Bobby Mottern, researched many options before settling on a company called O2 Composting after seeing their work at Chanticleer Garden in Wayne, Penn.

Working with the company, we were able to design and build an aerated static pile (ASP) composting system of our own for herbaceous and other “soft” debris in our maintenance compound at the corner of Lewis and Anderson streets. To create compost, you need oxygen to feed the microbes, which is normally accomplished by manually turning the pile every week — a lot of work if you have a big pile. With our aerated system, oxygen is incorporated via perforated pipes on the bottom of each compost bay and a blower. The blower forces fresh air through the pipes and up through the pile of plant debris, in cycles of two minutes on followed by 30 minutes off.

Not only does this stimulate the growth of microorganisms that break down organic materials, we are also able to adjust the airflow to control the temperatures inside the piles. We aim for a constant temperature of 140 degrees Fahrenheit for 60 days, which accelerates the process and keeps offensive odors and flies to a minimum. After two months, we turn off the blower system and move the pile out of the bay to cool and cure for another four weeks. The end result is a high-quality compost product that is effectively free of pathogens, parasites and weed seeds, which can be used as needed to improve garden soil. As a bonus, the entire process takes far less labor and equipment than a more traditional compost system.

What about all the woody waste material material that can't easily be turned into compost, such as loads of limbs, wood chippings, and downed trees? Over the course of six months to a year, we pile all our debris up. Once the pile is large enough, we call in a contractor who has a horizontal grinder, an impressive machine that can chew 30-inch diameter logs down to 2-inch shredded mulch. This mulch must sit in the aerated bays for 30 days, with the blower on to ensure that it is heated to at least 140 degrees Fahrenheit for at least five of those days to kill any weed seed, insect pests, or plant diseases that might make their way into the pile. By the time the finished mulch is ready, the pile is approximately one-third of the original size, and we no longer need to buy mulch for the garden.

Once we had this system up and running, we realized that we could also help Duke University's Facilities Management department with its waste as well. Now we process debris from across the entire university. Every six months we turn roughly 1,200 cubic yards of landscape debris — a pile roughly 15x50x70 feet — into about 300 cubic yards of mulch and 90 cubic yards of compost. We calculate that this program reduces Duke’s annual costs by approximately $50,000, shrinks the landscape carbon footprint by about 13 metric tons, and produces roughly 11 tractor trailer loads of finished mulch.

And that is how Duke Gardens turns trash into treasure. 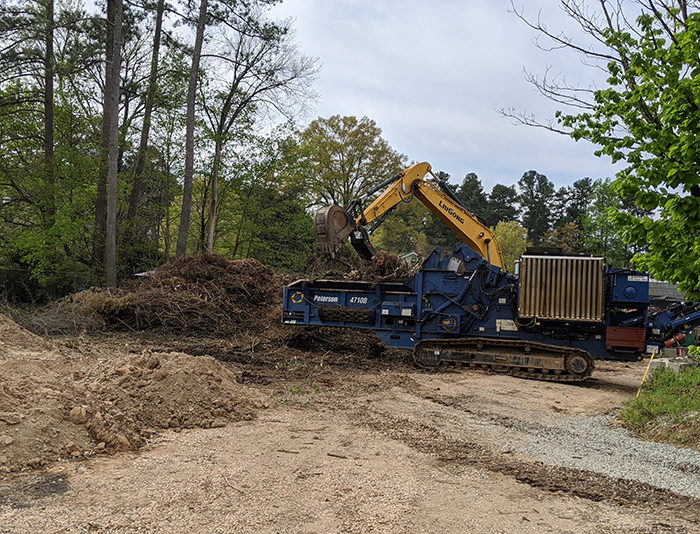