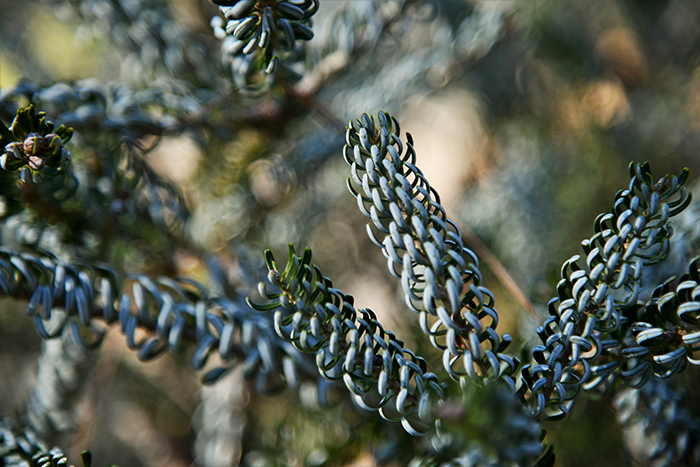 A Diversity of Christmas Trees

For one month at the end of every year, millions of Americans who celebrate Christmas bring a bit of nature into their living rooms via the Christmas tree itself. Although frequently overlooked as a generic evergreen that serves as a prop or a backdrop to the festivities and shelters the presents, this iconic symbol comes with a fascinating cultural and botanical history, and in a wide range of shapes, sizes and species.

The modern tradition of Christmas trees dates back to Renaissance Germany, but it gained widespread popularity across Europe and North America starting in the 1800s. Prior to World War II, most Christmas trees in the United States were wild-grown, either cut singly by individuals or in larger groups to sell. Before the development of large farms, the choices were limited to what grew nearby. In central and eastern North Carolina, this usually meant various species of pines or eastern red cedar (Juniperus virginianus), which grow in abundance in recently disturbed clearings. Christmas tree cultivation as an industry took off in the 1950s and continues to this day, to the point where almost all live Christmas trees in the United States are now farm-raised. Despite this, the exact species available for sale in any given area depends heavily on local and regional conditions, as well as aesthetics and consumer demand.

Here in North Carolina, the most common species you’ll encounter is the Fraser fir (Abies fraseri), which is native to scattered pockets within the southern Appalachians. Although endangered in the wild, farm-raised Fraser firs are one of the most popular and sought-after Christmas trees, commonly referred to as “Cadillacs of Christmas trees” because of their symmetry, beauty, and scented needles. The related balsam fir (A. balsamea) is also a popular choice farther north through New England and Canada.

Because most firs thrive best in cool mountainous areas and dislike heavy clay soils and damp “feet,” the majority of Christmas trees you find in the Triangle are from farms in the western half of the state.  However, for those who would like to grow their own Christmas trees closer to home, there are a few firs that do well in the Piedmont. Momi fir (A. firma) from Japan is more tolerant of heat and humidity than other firs, so much so that it is used as rootstock for more finicky species. You can see a mature specimen thriving adjacent to the pond in the Culberson Asiatic Arboretum. The arboretum also contains an especially showy cultivar of the Korean fir (A. koreana ‘Silberlocke’), with unusual rolled needles and purple cones.

Not all Christmas trees are firs, though. The Colorado blue spruce (Picea pungens), with its attractive blue-green needles and rounded form, is commonly available in northern and western states. Although spruces and firs are often mistaken for each other, the two can easily be distinguished by their leaves: spruce needles are spiky and sharp, while firs are feathery and soft. In Florida and the Deep South, the fast-growing and heat-tolerant Leyland cypress (Cupressus × leylandii) and sand pine (Pinus clausa) are preferred as Christmas trees because they can be grown locally instead of having to be shipped in from out of state.

Regardless of which species you start with, Christmas trees can’t be grown overnight; each tree represents a significant investment of labor and effort. For Fraser firs, it takes seven to 10 years to produce a 6- to 7-foot tree. Trees are pruned and sheared regularly to maintain their symmetrical shape, and they are especially vulnerable to ice and windstorms, which can bend or break branches and ruin their form.

Of course, not all Christmas trees have to be conifers, either. In recent years, smaller, more compact “trees” made of sheared rosemary bushes (Salvia rosmarinus) are available and mimic the look and form of a more conventional Christmas tree without needing to be strapped to the top of a car in order to be transported home. And of course, let’s not forget about artificial Christmas trees, which can come in any material, color or shape imaginable. Though tradition may mandate a living tree for many people, the possibilities are limited only by your imagination!