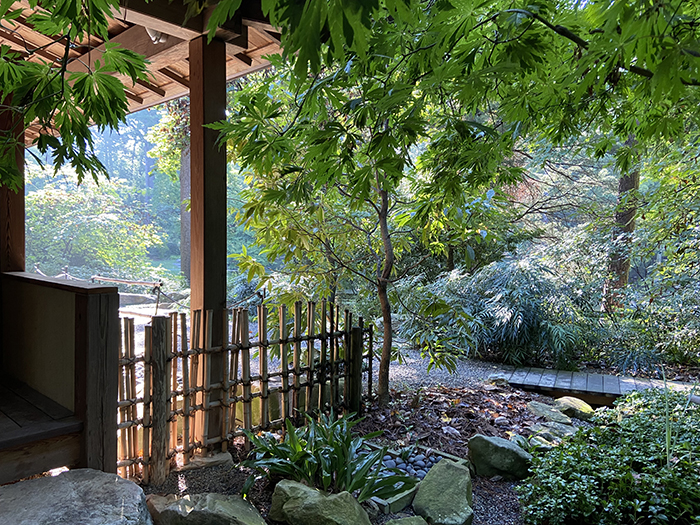 As Japanese gardens have gained widespread popularity over the past century, many non-Japanese designers and horticulturists are faced with the question, “What defines a Japanese garden?”  A certain mystique surrounds this design topic, which I hope to partially dispel here with a brief discussion about a few fundamental concepts. These include: wabi-sabi, contrasting formal and informal elements and, perhaps most important, extremely intentional flow of human movement through space.

Let’s begin with wabi-sabi, an important philosophical component of Japanese culture. My current understanding of wabi-sabi is that life and art are beautiful not because they are perfect and eternal, but because they are imperfect and fleeting. There is an overlapping joy and melancholy there that's markedly different from many Western philosophies, which find beauty in perfection and permanence. This dramatic contrast in worldviews can be seen in the Parthenon in Athens, Greece, and Japanese kintsugi pottery. 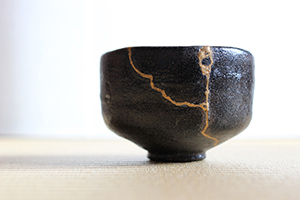 The builders of the Parthenon went to great lengths to create architecture that appears straight, parallel and symmetrical. The columns that surround the structure are bowed outward slightly in their middles to counteract how we normally perceive a tall column, which is with a thinner “waist”. Adding curves made them appear straight and strong, and therefore beautiful and ideal. Kintsugi pottery in Japan, on the other hand, finds aesthetic beauty in repairing cracked ceramics with gold, silver or platinum joinery, reveling in rather than disguising imperfections.

In the context of our Japanese garden, our team regularly discusses how to best make the Japanese Garden embody this idea in concrete ways: Should we leave an aging tree to die in place or remove it? Should we deadhead spent flowers or cut back a dormant plant?

Often, we arrive at the same conclusion: Yes, leave that aging tree to die because we see beauty in its deep lean, its bark dropping or its deep fissure in the trunk. Yes, leave those spent flowers because we see beauty in their crinkled petals, the rattle of their seed pods in the wind and their drying, ochre leaves. But let’s not conflate valuing age and aging for valuing an unkempt space. We are striving to leave that which expresses the nature of time, which is so intrinsic to our craft. 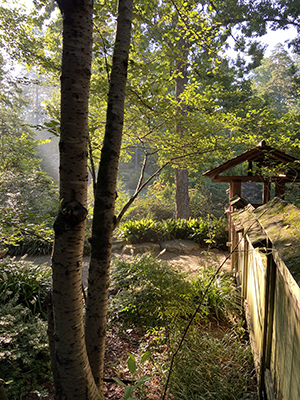 We also discuss, especially as new projects arise, whether wabi-sabi can be created from whole cloth or only selected and nurtured. This is perhaps the more difficult philosophical question. I personally believe that the groundwork for wabi-sabi can be laid, but mostly it is developed by selecting moments and details over time, and carefully “letting things happen.” When an uninvited fern joins the party in a bed of moss, perhaps we let it happen. And when a wood shingle on the roof has grayed and begun to chip at the corner, perhaps we quietly, at least for a time, let it be.

These examples do not exist in isolation, and in fact they are elevated by contrasting them against more or less formal elements. In other words, part of what defines a Japanese garden is the contrast of formal (often architectural) features against informal (often natural) features. One of the clearest examples in the Ruth Mary Meyer Japanese Garden are the straight lines and hard angles of the Durham-Toyama Sister Cities Pavilion’s tea house and gates set against the naturalistic plantings that surround them. Each element is emphasized by the other and reveals the dynamic interplay between the human touch and the natural world we’re a part of.

Finally, but perhaps most importantly, many of the design decisions that define a Japanese garden have less to do with symbolism and more to do with centuries of refined strategies to control how human bodies move through space. For example, a pathway composed of stepping stones forces a person to slow down, think and observe more carefully. This design strategy is frequently employed in a tea garden to mentally prepare people for the focused practice of a tea ceremony. The same can be said of the Nijiriguchi, or crawl-in entrance to a traditional tea house. Forcing everyone to enter a space on their knees renders everyone equal regardless of their standing in society. The socio-political symbolism is clear, but it’s the physical act of lowering oneself to pass through a small door and the effect that has on the body and mind that guides the design first and foremost. 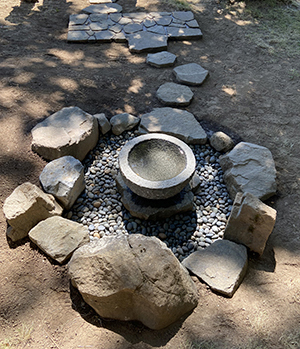 In a very real sense, the entire craft of landscape design could be defined by how bodies move through space. Japanese gardens, therefore, are simply site-specific design solutions to reveal the values of Japanese culture through time. Plant choices, hardscape material choices and building choices are all subservient to this goal.  By starting every project with the question, “How do I want a person to move and feel in this space?” we are able to enter into the realm of Japanese design with more ease and clarity.

Learn more: Eli Feldman will teach "Design Basics: Japanese Garden Design Strategies" on site on Oct. 26 from 2-3 p.m. The class is full, but you can read more about it on our program registration site and request to be placed on a waiting list or receive notices of future classes.