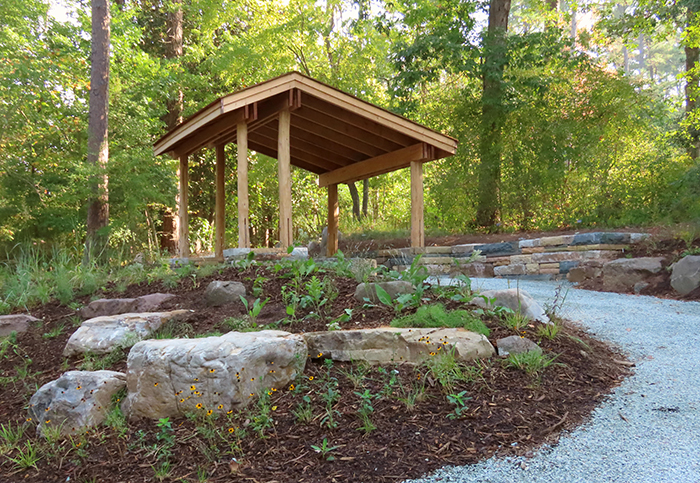 A NEW SOUTH ENTRANCE TO THE BLOMQUIST GARDEN 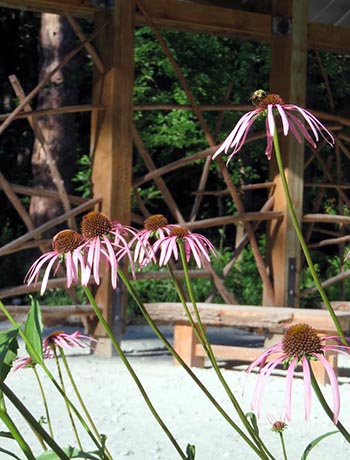 The Blomquist Garden of Native Plants has a beautiful new southern entrance near Flowers Drive, thanks to the generosity of Rick and Beth Fisher, longtime friends and supporters of Duke Gardens.

This gateway, dedicated in a ceremony with the Fishers today, was a gift to Duke Gardens in honor of Stefan Bloodworth, the third curator of the Blomquist Garden (2002 – 2018), whose tenure saw great advances in the conservation of Southeastern native plants at Duke Gardens.

During the past six months, this Blomquist entrance has been transformed. Gone is the steep and narrow climb that opened out into the Piedmont Prairie. Instead, perched on the hillside stands a simple, graceful structure that spans a new, winding path inviting visitors to take a journey.

The  gateway, which would not be out of place on the Blue Ridge Parkway, was designed by Durham architect Ellen Cassilly to echo but not copy the style of the Piedmont Prairie Classroom. The structure comprises a lean-to roof topped with cedar shakes, supported by six red cedar tree trunks harvested from Duke Forest, and with rafters from pines milled from the Blomquist. The cedar trunks are attached to a base of distinctive stonework by Brooks Burleson, whose stonemasonry graces many features throughout Duke Gardens.

This was Brooks' first endeavor with dry stone walling at Duke Gardens, and it is simply stunning. He has incorporated large slabs of various types of stone and boulders into the wall that forms the base of the shelter. The variety of stones give the appearance of a mosaic, which adds to the overall uniqueness and attractiveness of this building. The marks from the hand-chiseling of these stones will endure for many decades to come.

A path to the prairie

After taking the path through the shelter into the Blomquist Garden, the unsuspecting visitor will arrive at the Piedmont Prairie and may be surprised by the wildness of the landscape. The contrast between the nature of the planting around the new entrance and the prairie is meant to surprise. The Blomquist prairie is a conservation display, not an ornamental display. It is home to mammals, reptiles, amphibians, birds and insects, not just a display of blooms for the benefit of people. Walking through the prairie, you’ll see butterflies and bees searching out plants, or goldfinches hanging onto seed heads.

The planting around the gateway is of a more ornate planting style, where plants are combined to complement color, texture and form, making the landscape easier to read and more in keeping with the rest of the planting in the Walker Dillard Kirby Perennial Allée. Yet the majority of the wildflowers and grasses used at the new entrance are local ecotypes and are found in prairie habitats of the Piedmont region. 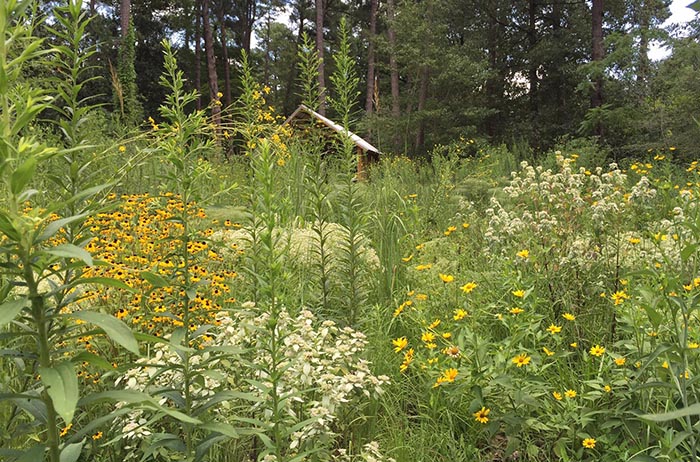 Several species used in this planting are rare, threatened or critically endangered, and some are even federally protected. The message we wish to convey to the visitor is that native plants are just like any other plant and can be used in a garden setting with success. More importantly, we want to convey that the natural habitats where these alluring, rare wildflowers exist are vanishing from our landscape. 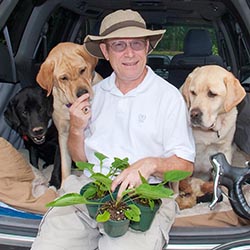 The Blomquist’s Piedmont Prairie, initiated in 2014, now covers almost 1 acre of the garden, and it contains more than 100 species of local ecotype wildflowers and grass species that once would have adorned the natural grassland ecosystem that covered the southeastern Piedmont prior to the arrival of the European colonists in the 16th century. Today most of this natural landscape has vanished, with only a few special sites remaining, known as remnant prairies. Some of these remnants contain plants that are so rare they have been designated federally endangered, which gives them extra protection.

Many of these remnant prairies in North Carolina are under the protection of plant conservationists, and it is not always easy for the public to see or appreciate these plants or their habitats. A large proportion of plant conservation work takes place out of sight of the general public often in remote places. This is quite different from endangered animals in zoos, for example, where people can pay to see them. In one way the Piedmont Prairie could be considered a plant zoo of sorts. Duke Gardens welcomes more than 500,000 visitors a year, and this prairie and new entrance will help to educate the public about plant conservation and loss of this unique habitat in the Southeastern U.S.

The Piedmont Prairie is a prime example of former curator Stefan Bloodworth’s vision for the Blomquist. Stefan was passionately committed to advancing native plant conservation in the spirit of the garden’s namesake, Hugo Leander Blomquist, the first professor of botany at Duke University. Stefan is now the executive director of the Columbus Botanical Garden in Georgia.

Rick and Beth Fisher’s support for Duke Gardens goes well beyond this lovely new entry. They also provided the funding for the Fisher Amphitheater in the Historic Gardens, a popular gathering spot for Duke students and visitors. Rick served on Duke Gardens’ Board of Advisors for many years, and he has also been a longtime volunteer, instructor, and photographer for the Gardens. We are eternally grateful to Rick and Beth for their passion and support for Duke Gardens. 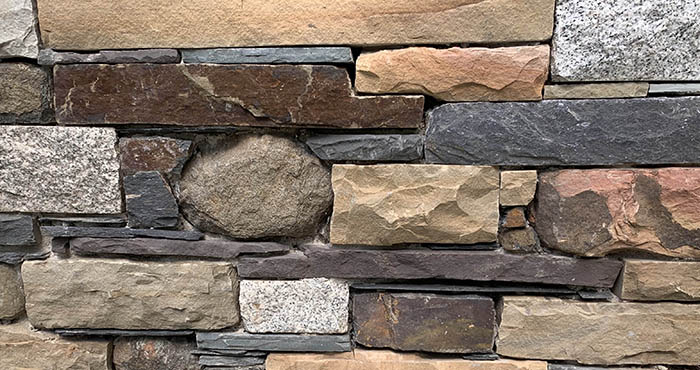