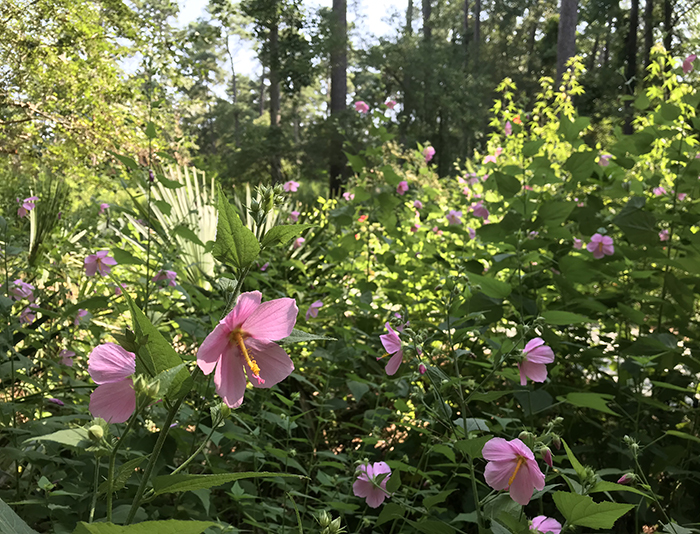 In this series, the staff of Duke Gardens highlights plants you’ll find within our 55-acre living collection. This week Katherine Hale, marketing and communications assistant, features a showy native bloomer. 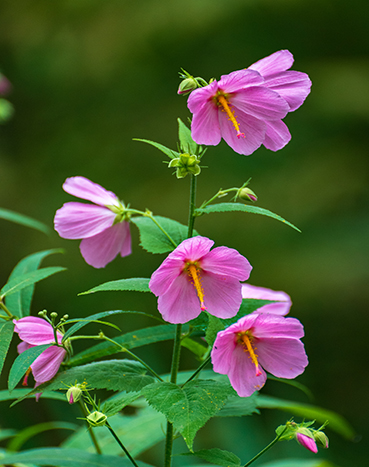 Let’s hear it for the late bloomers. As the weather cools and the days shorten, seashore mallow (Kosteletzkya virginica, pronounced Kost-el-LETS-kee-uh) is just getting started, blooming now through the first frost. This native perennial is one of the last to emerge each year—long after other species have come and gone—but its profusion of silver-green, maple-like leaves and masses of pink blooms make it well worth the wait.

Part of seashore mallow’s prolificity is due to its floral structure. As with its hibiscus relatives, each flower lasts for a single day, so it’s in the plant’s best interest to set additional new blooms each day to ensure maximum opportunities for pollinators. These visitors include bumblebees and other native insects, as well as migrating ruby-throated hummingbirds and monarch butterflies passing through on the way to their overwintering sites in the tropics.

Yet thanks to the ingenious design of its floral structure, seashore mallow is a participant in the pollination process. A closer look at the distinctive tubular column at the center reveals tiny pollen-bearing stamens clinging to the surface, well-removed from the fuzzy pink five-parted pistil at the tip. If a passing pollinator happens along, it will rub pollen from other plants onto the pistil, triggering outcrossing, or seeds with two different parents. However, if the weather is wet or cloudy enough for pollinators to stay home, the pistil will gradually droop as the day progresses, allowing the plant to breed with itself in a botanical trick known as “delayed selfing”.

Regardless of the method of pollination, each flower quickly transforms into a fruit of brown, five-segmented capsules that resembles a flattened okra pod (another member of the mallow family), adding visual interest and texture to the fall and winter garden.

Oddly, despite the prolific seed set, these plants rarely self-sow in the garden, even though they will easily germinate when sown in flats. Researchers in China are investigating the seeds as a potential source of cooking oil and biofuel, but so far seashore mallow is primarily grown as an ornamental.

As its common name suggests, seashore mallow is abundant along the Atlantic coast from New York to Florida and Louisiana. A halophyte, or salt-tolerant plant, its niche is soil too brackish or soggy for any competitors to tolerate. However, it is perfectly content when transplanted in ordinary garden soil and flourishes in the Piedmont hundreds of miles inland from its typical range, making it the perfect choice for pond edges, rain gardens, ditches, low spots, perennial borders, or roadside edges with a high salt load.

The hardest part of growing seashore mallow is finding it! Although increasingly available at local nurseries, seashore mallow is still woefully obscure, which is a shame given how easy it is to grow and propagate. In addition to the usual pink form, you may also find a white-flowered variety that is rare in the wild.  But once you see this versatile native in action, you’ll agree it was well worth the time and effort to add it to your garden.

Photos by Annabel Renwick (above) and Cathi Bodine (right).