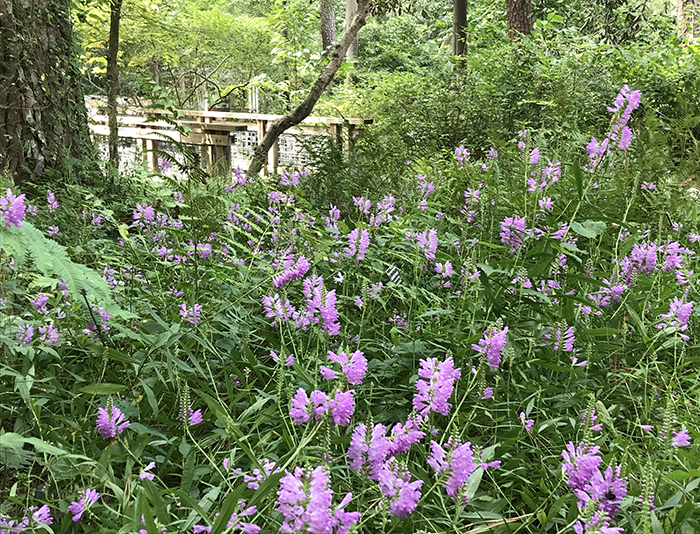 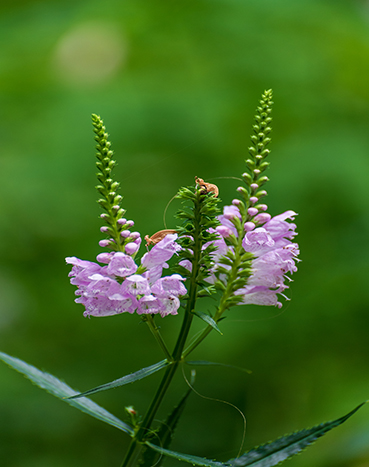 While many native plants are winding down by mid-September, others are just getting started. The better-known goldenrods and perennial bunchgrasses hail from dry, upland prairie, but the more obscure obedient plant (Physostegia virginiana) thrives in sunny, wet meadows and streambanks throughout eastern North America, forming dense colonies with gorgeous spikes of pink- or lilac-colored flowers.

Obedient plant derives its common name not from its behavior in the garden—like many rhizomatous perennials, it can actually be a bit aggressive in richer soils if left to its own devices—but from an unusual property of its flowers. Each flower can be turned to face a different direction with a push of a finger, and they are hinged at the base, so they will remain in their new position until relocated once more, which is great for flower arranging or as a simple way to amuse oneself.

Another common name, “false dragonhead,” stems from its former classification with the true dragonhead (Dracocephalum spp.) before it was moved to its own genus. As chance would have it, obedient plant is also frequently mistaken for the completely unrelated snapdragon (Antirrhinum spp.) from a distance. However, a closer inspection reveals that obedient plant lacks the “lips” typical of snapdragons in favor of the open tube characteristic of the mint family, which makes it easier for pollinators like ruby-throated hummingbirds and native bumblebees to access the nectar and pollen inside.

Obedient plant is an excellent choice for cottage gardens, rain gardens, pollinator meadows and any place where a naturalized, low-maintenance look is desired. A number of cultivars are available in the horticultural trade, including those with white flowers and a more compact and upright growth habit than is typical for the wild types. Look for it now and into October in the Blomquist Garden of Native Plants, where it melds seamlessly with ferns and other understory plants in colorful patches along the McNabb Family Stream.