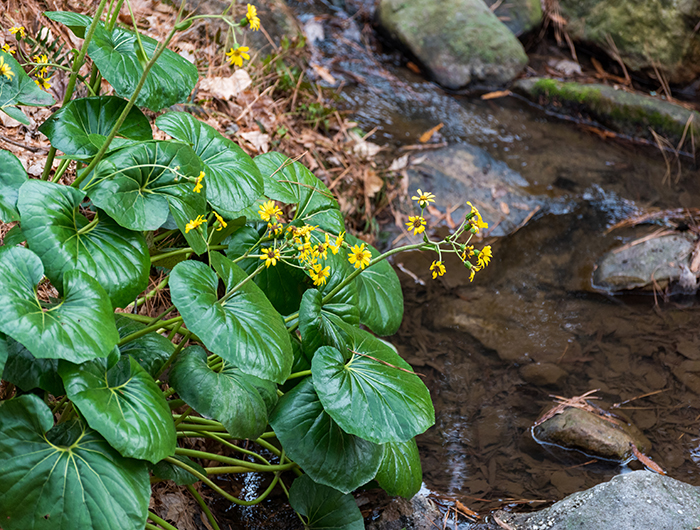 In this series, the staff of Duke Gardens highlights plants you’ll find within our 55-acre living collection. This week, marketing and communications assistant Katherine Hale features a plant that's easy to spot from a distance.

How did the leopard plant get its spots? The answer depends on which variety you’re talking about. In certain cultivars, such as Farfugium japonicum ‘Aureomaculatum', some of the normally bright green pigments in the glossy, evergreen leaves are masked by yellow carotenoid pigments, creating a spotted pattern reminiscent of dappled sunlight or jungle felines. However, just as there are melanistic black leopards without visible spots, there are also many cultivars of leopard plants that lack the spots entirely. 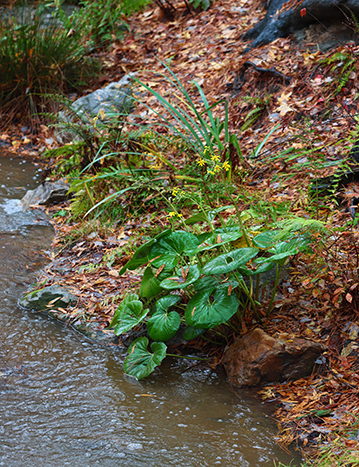 Known in its native Japan as tsuwabuki (石蕗), leopard plant can be found along stream banks and moist slopes throughout the country, as well as in China and Korea. This widespread range has led to a great deal of diversity within the species, with a number of different leaf shapes and sizes that may or may not have spots. Here in the United States, the leopard plant has also been informally dubbed “tractor seat plant,” thanks to the distinctive shape of the more commonly grown strains, which resemble their namesake in shape and are sometimes just as big! These leaves contain toxic pyrrolizidine alkaloids that can cause liver damage if ingested, which protect the plant from mammalian predators like white-tailed deer.

The leopard plant is closely related to ligularia (Ligularia spp.), and many older botanical volumes sometimes list it as a member of that genus. To confuse matters even further, many ligularias are commonly referred to as “leopard plants” themselves. Farfugium are also kin to butterburs (Petasites spp.) and coltsfoot (Tussilago farfara), which have similar leaves and habitat requirements but are less commonly seen in gardens.

Leopard plants are similar in some respects to hostas (Hosta spp.)— both are shade-loving herbaceous perennials from Asia grown primarily for their foliage. Like hostas, leopard plants have beautiful flowers, which appear on long stalks beginning in late summer and continuing into the fall. However, while hostas belong to the asparagus family, one glance at a leopard plant in bloom reveals its true identity as a member of the daisy family, with its bright yellow and orange flowers. After the flowers fade, they are replaced by dandelion-like puffballs with tiny seeds that scatter in the wind.

Visitors will find leopard plants throughout Duke Gardens, with colonies in the shadier sections of the Culberson Asiatic Arboretum, and giant leopard plants (Farfugium japonium var. giganteum) along the streambank in the Welch Woodland Garden. Compare them to the similar-looking ligularia (L. dentata 'Desdemona') in the Walker Dillard Kirby Perennial Allée and behind the Bartter Family Terrace House along the staircase to the Spengler Camellia Garden in the Historic Gardens.