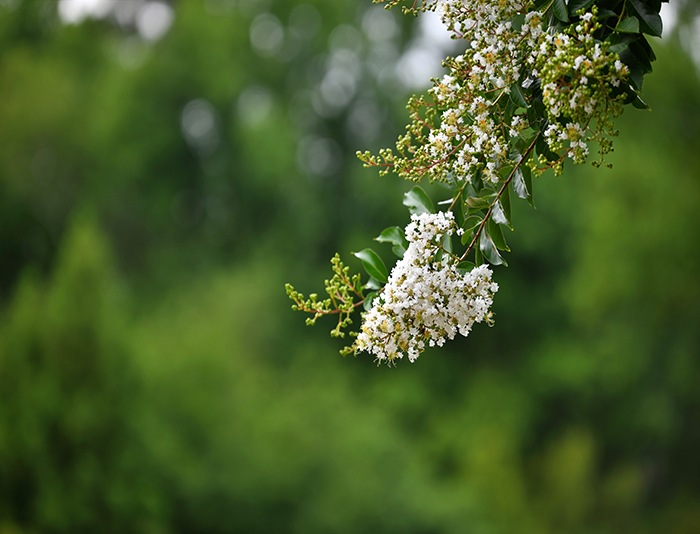 In this series, the staff of Duke Gardens highlights plants you’ll find within our 55-acre living collection. This week, marketing and communications assistant Katherine Hale features a widely planted ornamental hybrid worth a second look. 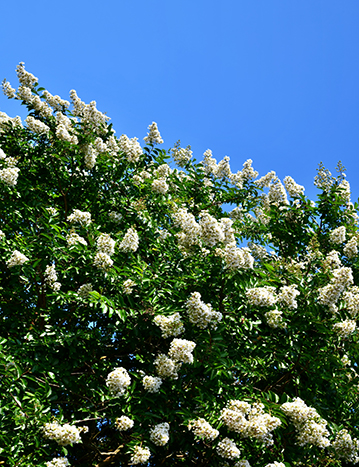 One of the most popular ornamental plants in the southern United States, crapemyrtles (Lagerstroemia spp.) might seem too ubiquitous to merit much attention. However, a closer examination of this widely planted genus proves that “common” is by no means synonymous with “boring.”

Although they superficially resemble true myrtles (Myrtus communis), crapemyrtles are actually members of the loosestrife family, which is best known for the showy but aggressive purple loosestrife (Lythrum salicaria), as well as pomegranates (Punica granatum), henna (Lawsonia inermis), and cigar plants (Cuphea spp.). One trait that all of these seemingly different plants have in common is their flower structure: in these plants, the petals emerge from the rim of the outermost whorl of the flower, frequently with the crumpled tissue-like texture reminiscent of crepe paper, from which arises the other half of the crapemyrtle’s common name.

Many gardeners famously cut back the tops of their crapemyrtles every spring, which produces dense clusters of new branches around the cut; over repeated seasons, this area will swell and thicken to form a dense and distinctive wooden burl. This practice, a form of a horticultural technique known as pollarding, is both widely practiced and highly controversial, with opponents denouncing it as “crepe murder.” Here at Duke Gardens, our horticulturists forego the laborious process of pollarding the crapemyrtles, which allows the plants to grow and expand into their natural form—beautiful multi-trunked trees with decorative, peeling bark and hundreds of beautiful flowers in dense clusters along the branch tips.

Although there are more than 40 species of crapemyrtles, only two species are generally grown in our area. Native to the Indian subcontinent, China, and southeast Asia, the common crapemyrtle (L. indica) has been a staple of southern gardens ever since its introduction in the 19th century. In contrast, the Japanese crapemyrtle, (L. fauriei) is a relative newcomer, first appearing on the U.S. horticultural scene in 1957, and is widely planted for its increased hardiness and resistance to powdery mildew disease. In recent years, large numbers of hybrids combining the best traits of both species have become popular as well.

Originally released by the U.S. National Arboretum in Washington, D.C., ‘Natchez' is one of several excellent hybrid cultivars from its crapemyrtle breeding program, all of which are named in honor of Native American tribes. It has white flowers instead of the usual pink or red, and it can be grown as an individual specimen plant or massed to form a screen or mark a boundary.  Look for it in the Page-Rollins White Garden, where it will bloom all summer long, the white flowers above providing a beautiful accompaniment to the summer annuals and herbaceous perennials below.

Photos from top to bottom: Close-up of 'Natchez' crapemyrtle flowers in the Page-Rollins White Garden, and canopy of blooms, by William Hanley; detail of peeling bark by Orla Swift. 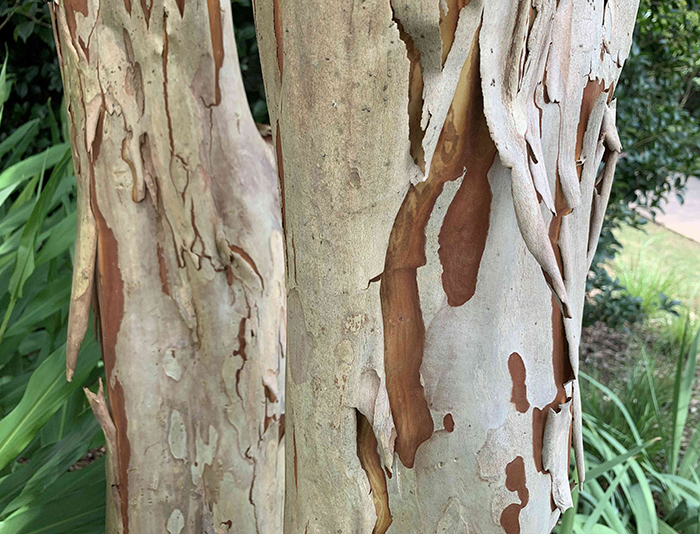