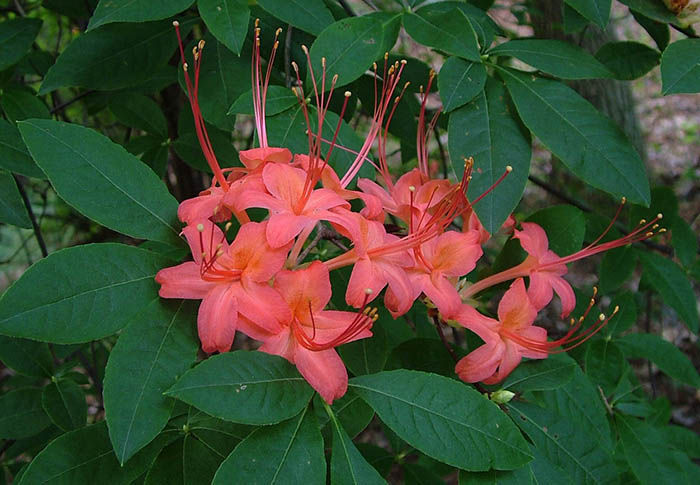 In this series, the staff of Duke Gardens highlights plants you’ll find within our 55-acre living collection. This week Annabel Renwick, curator of the Blomquist Garden of Native Plants, talks about a late-blooming and rare azalea, Rhododendron prunifolium (Small) Millais.

Strolling through the Blomquist Garden of Native Plants on a hot, humid day in July can be taxing. Yet if you take the path toward the Ed Steffek Bridge spanning the fern grotto, your efforts will be rewarded.

Above the grotto stands a small grove of the late-flowering plumleaf azalea (Rhododendron prunifolium) displaying vivid orange-red blooms. Not only is this azalea one of the most striking native rhododendrons in the Southeast, it is also one of the rarest.

First collected by the botanist R.M. Harper in 1913, Azalea prunifolium, as it was then described, was discovered growing in wooded ravines and stream banks in a few counties of Georgia and Alabama bordering the Chattahoochee River. The Arnold Arboretum brought the species into cultivation in 1918, and it was well received due to the arresting appearance of its flowers and its midsummer flowering time. Unfortunately, plumleaf azalea is in decline in the wild due to land clearing and poaching. There are only 50 to 60 sites of wild populations remaining in its native range. 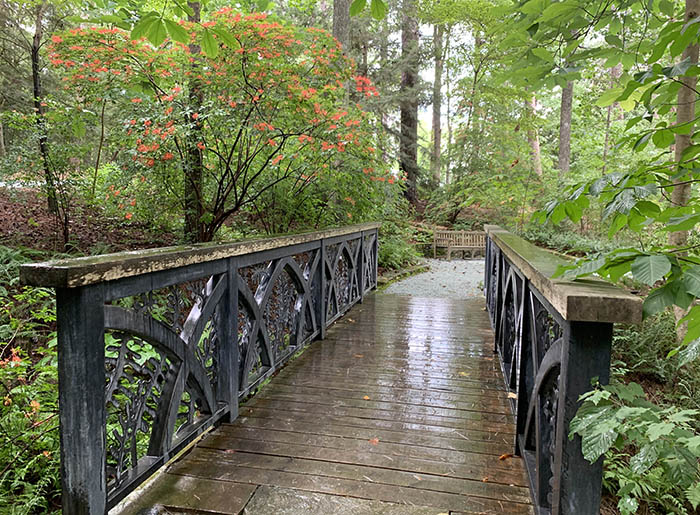 R. prunifolium has a graceful open growth habit, and it grows as a large shrub or small tree up to 12 feet tall. Its twigs are hairless, unlike some of the other closely related southeastern native deciduous azaleas like Rhododendron calendulaceum (flame azalea) and Rhododendron flammeum (Oconee azalea). The plumleaf azalea bears oval leaves with pointed tips alternately arranged on the stem. There is very little or no stalk attaching the leaf to the twig. The vivid orange-red flowers are funnel shaped with five spreading petals and five long and showy stamens. Despite its flowers having no fragrance, it still attracts bees and butterflies.

As with the majority of rhododendrons, the plumleaf azalea grows best on moist, well drained, acidic soil and tolerates dappled shade. It does not grow clonally or form thickets but propagates from seed.

The Blomquist Garden of Native Plants comes alive in the spring with the succession of deciduous and evergreen southeastern native azaleas. Walking along the wooded paths, you may catch a glimpse of the delicate but prolific pink blooms of the mountain azalea (Rhododendron canescens) deep in the trees or detect its perfume drifting in the breeze, or stumble upon the stunning, perfumed, ochre colored blossoms of the orange azalea (R. austrinum) as you turn a corner. However, in my opinion nothing can compare to the plumleaf azalea as it comes into flower, setting the woodland alight during these sultry days in high summer when the majority of the flowers in the woodland garden have already set seed.