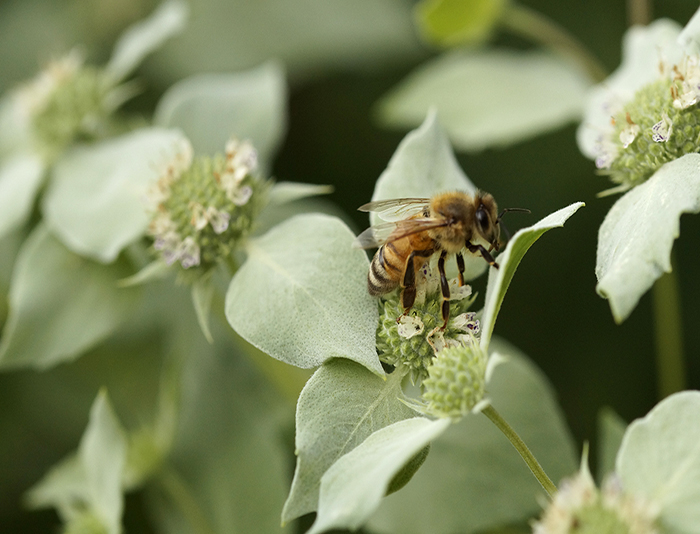 In this series, the staff of Duke Gardens highlights plants you’ll find within our 55-acre living collection. This week, marketing and communications assistant Katherine Hale features a group of native perennial wildflowers that has all the insects abuzz.

Most animals rest during hot summer afternoons, but visitors to the Blomquist Garden of Native Plants or the Historic Gardens’ Butterfly Garden will notice one group of plants in particular that are literally buzzing with activity from late June through September, even in the middle of the day. The sources of all this attention are the mountain mints (Pycnanthemum spp.), native perennial wildflowers that are a guaranteed to attract beneficial insects to your garden.

Despite their common name, mountain mints aren’t limited to the mountains—they can be found across eastern North America from Texas to Ontario and west to the Mississippi River, with one additional species in California. North Carolina is the epicenter of mountain mint diversity, with 13 out of 20 species growing within the state borders. Two of these are commonly grown in horticultural settings: the hoary mountain mint (P. incanum), which has broad green leaves with a frosting of white on the upper bracts surrounding the flowers, and which does well in dry soils; and the similar-looking short-toothed mountain mint (P. muticum), which prefers moister areas. Also common in our region along roadsides and power line rights of way is the narrow-leafed mountain mint (P. tenuifolium), which is easily distinguished from the other members of its genus at a distance by its eponymous and tiny yellow-green leaves and its shorter stature. 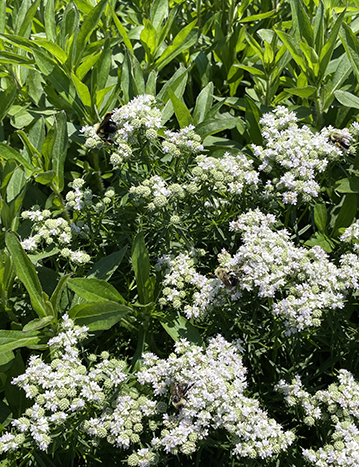 As with other members of the mint family, all mountain mints have square stems, opposite leaves and a strong minty fragrance, especially when the leaves are crushed. Just like the culinary mints (Mentha spp.), which originate from the Mediterranean, these leaves can be used for tea, and the plant spreads by creeping rhizomes rapidly naturalizing once established. Where these species really shine, however, are as pollinator plants, drawing in an impressively wide range of insects from the moment the flowers open.

This isn’t merely anecdotal: a 2013 study at Penn State Extension Service documented 78 insect visitors within a few minutes to their mountain mint, making it the top plant in the study by a wide margin. A closer look at the flower heads reveals the reason why: each one is packed with dozens of tiny flowers, which bloom in sequence over the course of several months, thus providing a steady, reliable and abundant source of nectar for hungry invertebrates.

In addition to honeybees and native butterflies like the common buckeye (Junonia coenia) and the eastern tailed blue (Cupido comyntas), mountain mints are heavily visited by many different kinds of solitary wasps, which also feed on nectar from the flowers. Unlike yellowjackets and hornets, which live in large groups and can be aggressive toward people, these wasps are harmless to everyone except the larvae of Japanese beetles (Popillia japonica) and June beetles (Cotinis nitida), which they capture and feed to their young. Some of the more colorful visitors include the two-spotted scoliid wasp (Scholia dubia), which has iridescent blue wings and a pair of bright yellow spots on its abdomen, and thread-waisted wasps (family Sphecidae), which have a tiny “waist” connecting their thorax and abdomen, just as their name suggests. Tiny iridescent sweat bees, tachinid flies, syrphid flies (hoverflies) and many species of beetles are common as well.

Native plant enthusiasts often quote the mantra, paraphrased from "Field of Dreams," that “if you plant it, they will come.” Nowhere is this more apt than with the mountain mints, drawing in beautiful and beneficial insects by the hundreds to come to feast on the bounty. Given the steep decline in insect populations in recent years due to pesticides and habitat destruction, they need all the support they can get. Thus, every patch of mountain mint you’ll find in the gardens is not only a beautiful summer sight, but an investment in a future that pulses and hums with life. 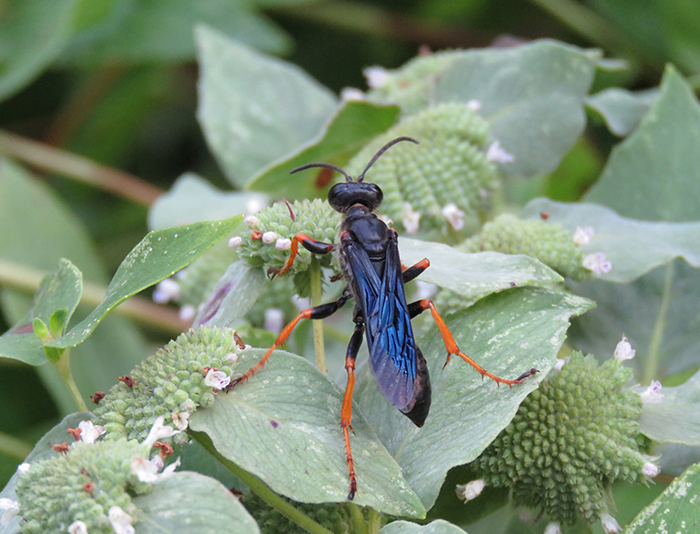