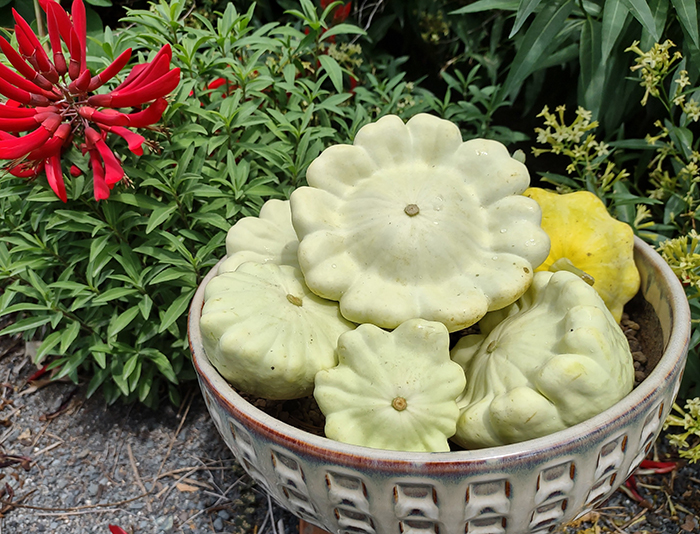 If you’ve been in the Discovery Garden lately, you might have wondered how we managed to grow a miniature spaceship! Some of you already know about pattypan squash, so you’re in on the secret. Pattypan or scallop squash is a type of Cucurbita pepo var. clypeata that is rounded on one side and flattened with charming scalloped edges on the other. If they are picked when just a few inches in diameter, the entire squash is edible, including the rind. The small tender ones can be grilled, oven roasted, or sauteed, and they have a mild flavor similar to zucchini. They toughen as they grow, and large ones are cooked more like a winter squash. Left too long on the vine, they make an attractive fall decoration but become too woody and fibrous to eat.

One of my favorite varieties growing in Duke Gardens is 'Patisson Panache Jaune et Verte’, which is a French heirloom squash. In France, scallop squash are called patisson, which in Provence is a word for a scallop-edged mold used to bake cakes. The rest of the name means “yellow and green plume” for the colorful variegated markings found on the mature rind. This bush-type variety is a prolific producer. The more you pick, the more it grows.

Cucurbita pepo is one of the oldest domesticated species and is known to have been grown in Oaxaca, Mexico, at least 8,000 years ago. Its origin is still up for debate, although it is generally accepted that it was domesticated separately in Mexico and in the eastern United States. Varieties of pattypan squash such as the white scallop are known to have been cultivated by the Indigenous people of America as early as 1591. The scallop squash was introduced into Europe in the early 1700s. ’Patisson Panache Jaune et Verte’ was described in Vilmorin's 1856 "Description de Plantes Potageres" and was sent from there to the United States by Seed Savers Exchange member Bruno Defay.

If you are lucky enough to find ‘Patisson Panache Jaune et Verte’ at your local market, or have grown some yourself this summer, try it in this simple grilled squash recipe: Chop about 1.5 pounds of squash into bite-size pieces and toss it in olive oil and a little salt and pepper. Grill for 6-10 minutes until tender, turning once. Top with butter, garlic and parsley and serve to 4-6 people immediately. Just be sure to save a few raw spaceships for the kids to play with!