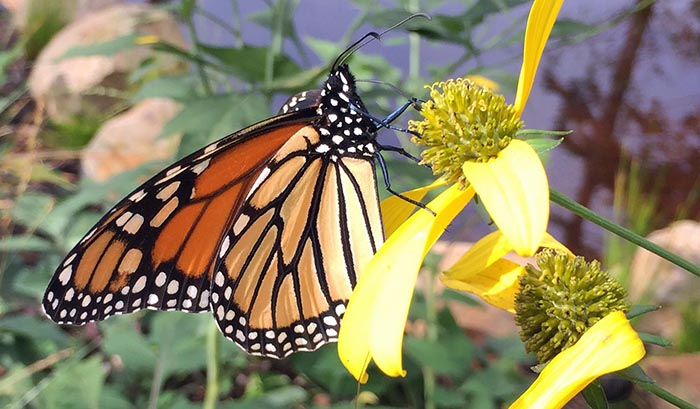 Insects are routinely seen as pests or annoyances—a threat to humans, our homes, pets, livestock, crops, and the apple pie at a Sunday picnic. However, without insects the world would be an inhospitable place.

Humans have existed side by side with insects throughout history and have contended with pestilence and starvation brought on directly or indirectly by these small but not insignificant invertebrates. Malaria remains one of the biggest killers of children throughout the world, transmitted by the female mosquito of the genus Anopheles. We don’t want to find our homes destroyed by termites or overrun with cockroaches. No-one wants to see cats and dogs eaten by fleas and ticks. Farmers don’t want to produce crops that have been attacked by aphids or have their grain eaten by beetles, and we don’t want reduced food quality with weevils inhabiting the flour on our pantry shelves.

The catastrophic events that once led to crop failure and starvation have been controlled primarily through the development of insecticides and insect-resistant crops.  This has led to improved crop yields, lower food prices and an ability to grow crops where once it would have been impossible due to pest pressure. As a result, within one generation the world’s population is expected to teeter on 10 billion. It is a success story, but one that leads to additional challenges of how to feed and maintain this massive population without jeopardizing the environment. 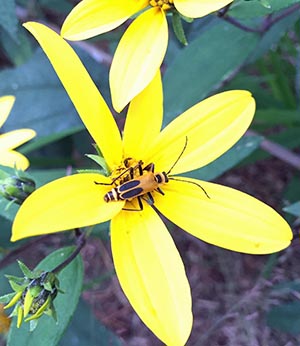 Some examples:
The Washington Post: Butterflies aren't expendable. Our brittle reality depends on them, too.
Smithsonian Magazine: Insects Are Dying Off at an Alarming Rate
The New York Times: The Insect Apocalypse Is Here. What does it mean for the rest of life on Earth?
BBC News: Insect decline may see 'plague of pests'

Although the major insect pollinators are bees, butterflies and moths, many inconspicuous small insects such as beetles, ants, wasps and flies also play a huge role in the pollination of plants. The reason for the insect decline is not fully understood at this time. It could be due to habitat loss caused by an expansion of urban spaces and intensified agriculture to house and feed an increasing population. It could also be related to the application of broad-spectrum insecticides used in agriculture or around our homes. Climate change may be also play a role. Or it could be a combination of all three, as well as unseen reasons that have not yet been considered. Whatever the cause, the decline must be corrected or life on this planet will change dramatically. 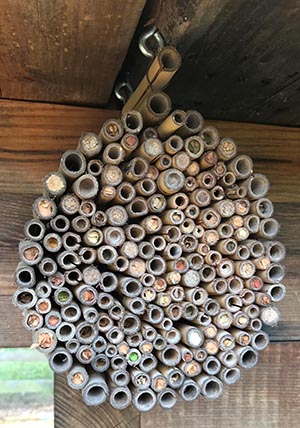 Gardeners know that organisms need shelter and food to thrive. Bluebirds need cavities for nesting, and a nest box works well to provide that home, but they also need plants that host caterpillars to feed their young, as do all other song birds. The decline of caterpillars will lead to a decline of birds. At Sarah P. Duke Gardens we are mindful of the needs of insects and other wildlife, so we focus on creating habitats and reducing—and in some cases nearly eliminating—our use of pesticides. There must be a balance of healthy insect life to support all other forms of life. When we eliminate toxic substances and provide the right host plants, insects will thrive.

To test the theory of insect decline, we thought it would be interesting to conduct a study of insect life here at Duke Gardens. This project will involve evaluating the quantity and quality of insect species across our 55 acres.,Duke undergraduate student Brandon Arjoon will capture, sort and identify the range of insects here. One of his tools for capturing flying insects is a small tent-like structure called a malaise trap. There are three of these tents stationed across the gardens. We will count and identify all insects that we collect. This project will establish a baseline of insect species in Duke Gardens that can be referenced in future insect studies across campus.

We have been excited about attracting pollinators to the Charlotte Brody Discovery Garden since its inception in 2012. Everyone should know that pollinators are vital for fruits and vegetable production; nearly 30% of all food is dependent upon pollinators. 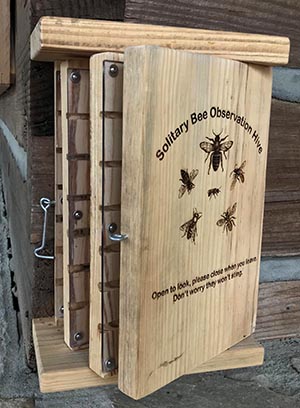 Many Discovery Garden plants are grown for food, but other plants here are vital because they attract pollinators. This includes mountain mint, bee balm, mummer sweet clethra, and a host of annuals. Insects carrying pollen from one plant to another is what creates squash, zucchinis, watermelons, peaches, apples, beans, peas and a plethora of other fruits and vegetables.

No animal can survive on food alone; we all need shelter. Many insects rely upon nooks and crevices to lay eggs either in plant material or some type of structure. We have all likely seen carpenter bees boring into our decks or houses during the summer. Many other insects also need cavities for reproduction and overwintering. Therefore, we decided to create “pollinator houses,” following the “Field of Dreams” mantra, “If you build it, they will come.” Our houses look like a typical bird house but with no front. The inside is layered with 5-inch pieces of bamboo stacked from the floor to the ceiling, with the open ends facing the front of the house. It looks like a handful of straws stacked on each other. The insects are drawn to the open cavities. We saw activity within days.

This year we also designed and built a solitary bee observation hive. It’s another version of a pollinator house, but with a glass wall so you can see the insects inside. Since placing it under the eaves of the Burpee Learning Center in March, we and visitors have seen mason bees building their broods. We’re all familiar with honeybees, but these little solitary bees do the majority of pollinating in gardens like ours. So it’s important to provide them with not only food but also shelter. 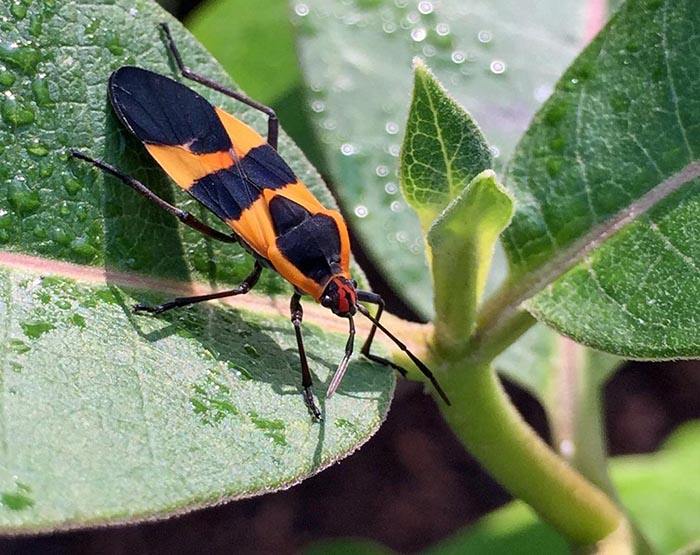 When European explorers first arrived at the Carolina piedmont, they discovered extensive native grassland grazed by bison and elk and managed through controlled burning by the indigenous population. (Read more about this in John Lawson’s 1709 book “A New Voyage to Carolina.”)

This landscape has practically vanished and today can only be found in protected remnants throughout the state or in fortunate locations like power line right of ways or roadsides, where they eke out an existence.

In 2014 we began researching these remnant prairies and decided they needed to be showcased here at Duke Gardens to help more people understand their importance. The next year we established a 1-acre prairie containing more than 100 species of wild flowers and grasses grown from locally collected seed. Within days, an area of the garden that had relatively low insect activity became consumed with insects. Birds, amphibians and small mammals soon followed.

Undergraduate students in Dr. Fred Nijhout’s entomology classes have carried out insect capturing and identification studies throughout Duke Gardens and Duke’s campus for more than 20 years. Dr. Nijhout has observed a substantial decline in insect families since the 1990s, however more recently he detected a slight increase in insect diversity at Duke Gardens since the addition of the prairie. We hope this observation reflects a real phenomenon. Our trapping studies will help us test this theory. 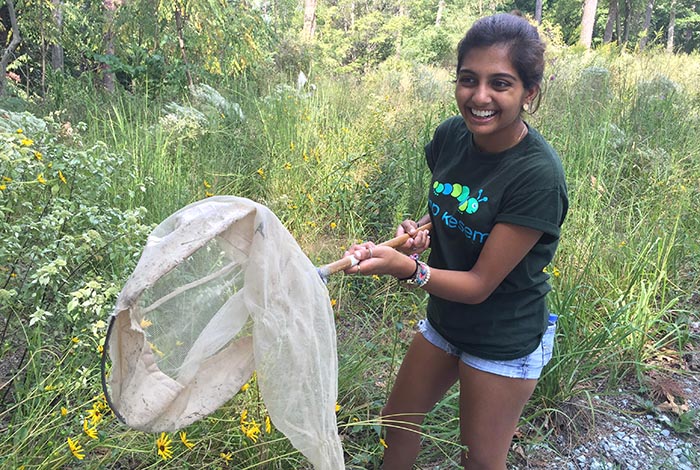 One enlightening story we discovered involves the catalpa worm. A catalpa tree has existed for nearly 20 years in this side of the garden where the prairie now stands.  Each year the tree was overrun by catalpa worms that devoured every leaf. As a result, the tree grew slowly, with poor vigor.

A year after the prairie was installed, we noticed the catalpa tree didn’t suffer caterpillar damage. We wondered how this happened. When we took a closer look at the catalpa worms that were present, we discovered they were parasitized by the eggs and larvae of tiny parasitic wasps. We assumed the prairie must have attracted the beneficial insects.

The next winter we burned the prairie as part of the natural maintenance of that ecosystem, and in June that year the catalpa worms once again reappeared, defoliating the catalpa tree. We learned that the parasitic wasps overwinter in the prairie plant material, and that burning would have reduced the wasp numbers.

We now will only burn the prairie every three years to maintain a balance of beneficial insects. This tree’s changing health illustrates the complex and dynamic nature of the landscape and how can we learn to work with nature rather than against it.

This article may give you cause for concern regarding the loss of beneficial insects. But it should also give you hope that each of us can do something to reverse the decline, from planting a pollinator garden to building insect hotels on our front porches or, if you have enough land, creating a native prairie.