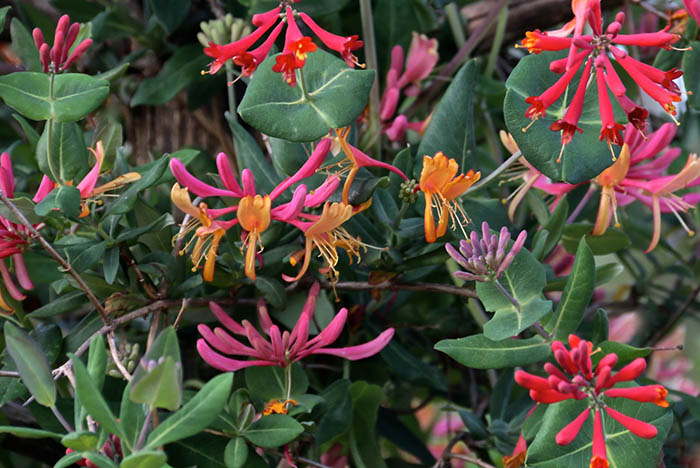 In our Horticultural Highlights series, the staff of Duke Gardens writes about plants you’ll find within our 55-acre living collection. This week, marketing and communications assistant Katherine Hale features a Southeastern native honeysuckle that butterflies and migrating songbirds adore.

Honeysuckles (Lonicera spp.) are beautiful plants cultivated for their sweet-smelling flowers and vigorous growth. However, some commonly planted ornamental species are invasive in this region and dominate both gardens and wild landscapes, like Japanese honeysuckle (L. japonica) and fragrant honeysuckle (L. fragrantissima). 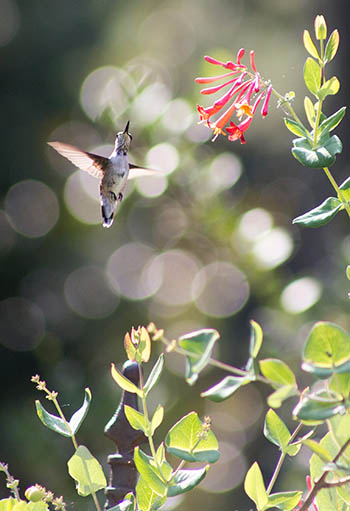 Gardeners needn’t fret—coral honeysuckle (L. sempervirens) is a Southeastern native vine that possesses all the excellent traits of its genus and is also highly beneficial for wildlife. Also known as trumpet honeysuckle, this showy perennial vine is usually staked to supports or draped across an arbor or a trellis, but if left to its own devices, it can also fill in as a sprawling ground cover. Although it can tolerate some shade, it flowers best in full sun, preferably in organically rich soils, though excess nitrogen fertilizer will result in lush leaves and relatively few flowers. Because it blooms on new growth, if it does need to be pruned, coral honeysuckle should be pruned after flowering to ensure an impressive show from late March through July.

Evergreen or semi-evergreen in warmer climates, coral honeysuckle is easily recognizable by its paired oval bluish-green leaves with a white underside, and by its vibrant red, orange or yellow trumpet-shaped flowers. It is sometimes confused with two other perennial native vines, crossvine (Bignonia capreolata) and trumpet vine (Campsis radicans), both of which bloom later in the year and sport much larger flowers as well as large divided leaves. However, all three occupy similar ecological niches, drawing in ruby-throated hummingbirds, bees, and butterflies with their bright red blooms.

In addition to its attractive leaves and flowers, coral honeysuckle produces bright red fruits each fall that are sought after by migrating songbirds. It is also the host plant for several species of native butterflies, including the spring azure (Celastrina ladon), a tiny blue butterfly that is one of the first species to fly each spring, and two species of clearwing moths (Hemaris thysbe and H. diffinis), large day-flying insects that are frequently mistaken for hummingbirds.

It’s rare in horticulture to find a plant that can “do it all,”—a low-maintenance, vigorous species with both ornamental and ecological value—but coral honeysuckle certainly comes close. For all of these reasons and more, keen-eyed visitors will spot it throughout Duke Gardens, along with all of the many creatures drawn to its beauty and bounty alike.

Celebrate Pollinator Week with us! 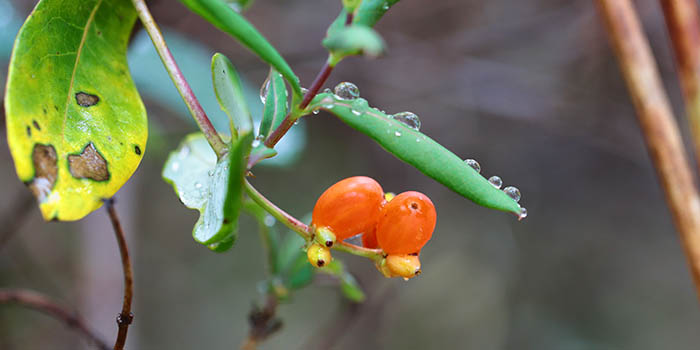