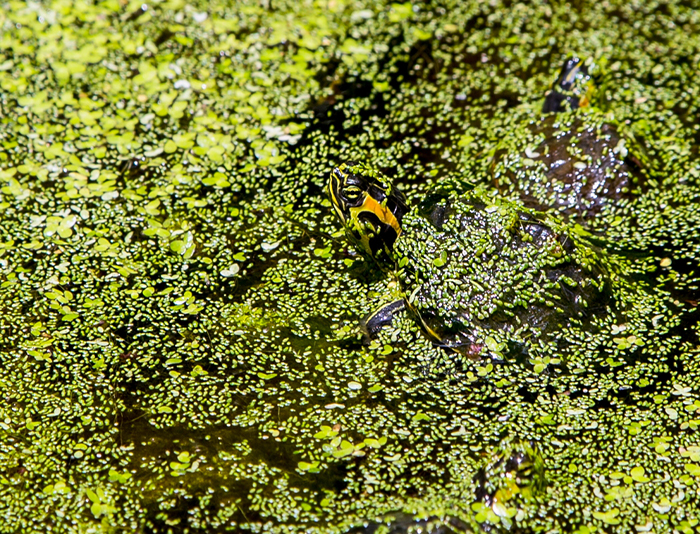 In this series, the staff of Duke Gardens highlights plants you’ll find within our 55-acre living collection. This week, marketing and communications assistant Katherine Hale features a small but mighty aquatic powerhouse that makes a splash. 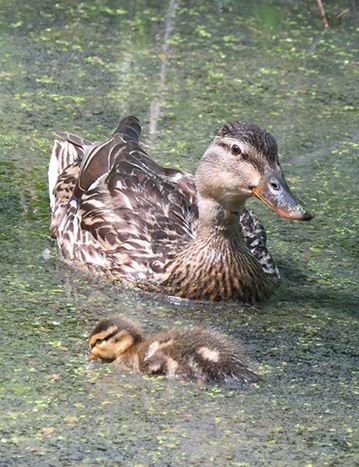 It’s really easy being green if you have a pond with common duckweed (Lemna minor), which can quickly turn the entire surface of a water feature into a vivid carpet of color. What looks like a solid mass at a distance is actually thousands of tiny specks, each one an individual plant consisting of one to four leaves filled with air sacs allowing it to float and a tiny rootlet dangling freely in the water—one of the smallest flowering plant species in the world.

Common duckweed is often erroneously referred to as “pond scum,” a generic term for various green algae or cyanobacteria that form dense, often stringy or slimy films atop the surface of water. Although they may look superficially similar to duckweed, and form in the same kind of slow-moving, warm, and nutrient-rich lakes preferred by duckweed, both algae and cyanobacteria have a vastly different life cycle and evolutionary history, and they lack leaves and roots entirely, making them easy to distinguish from each other up close.

Each fall, duckweed plants produce specialized buds known as turions, which sink to the bottom of the pond, where they overwinter. After temperatures rise in the spring and early summer, the buds rise back to the surface, where they quickly grow into mature plants and begin the cycle anew. Although duckweed primarily reproduces through vegetative division, with each plant splitting into two when it reaches maximum size, it will occasionally produce simple white flowers approximately 1 millimeter in diameter, which vaguely resemble those of its larger aroid relatives like the peace lily (Spathiphyllum sp.) and Jack in the pulpit (Arisaema triphyllum).

Visitors to the Blomquist Garden of Native Plants may assume that something is amiss with its ponds because they are dominated by duckweed in the summer and fall, but in fact this species occurs naturally in nutrient-rich, or eutrophic, lakes across North America. Unlike algal blooms, which can stifle wildlife and destroy diversity by depleting the available oxygen in the water as they decay, duckweed can be a sign of a healthy ecosystem, and a large duckweed population can prevent or reduce the likelihood of an algal bloom. True to its name, duckweed is an excellent food source for wildlife, particularly wild birds that unknowingly spread it from pond to pond in their travels, though mammals, fish, and amphibians also enjoy its bounty.

Because duckweed can double its mass in 48 hours under ideal conditions, it is increasingly grown for livestock feed and fertilizer, as well as a natural form of bioremediation for waterways with excess nutrients due to human activity. In the future, you may well see more duckweed rather than less as this small but mighty plant is rightly celebrated for its many benefits.

Photos from top to bottom: A painted turtle (Chrysemys picta) covered in duckweed ,by Cathi Bodine; a family of mallard ducks (Anas platyrhynchos) enjoying a duckweed snack, by Sue Lannon; the Sunny Pond in the Blomquist Garden of Native Plants with a thriving duckweed population, by Clarence Burke. 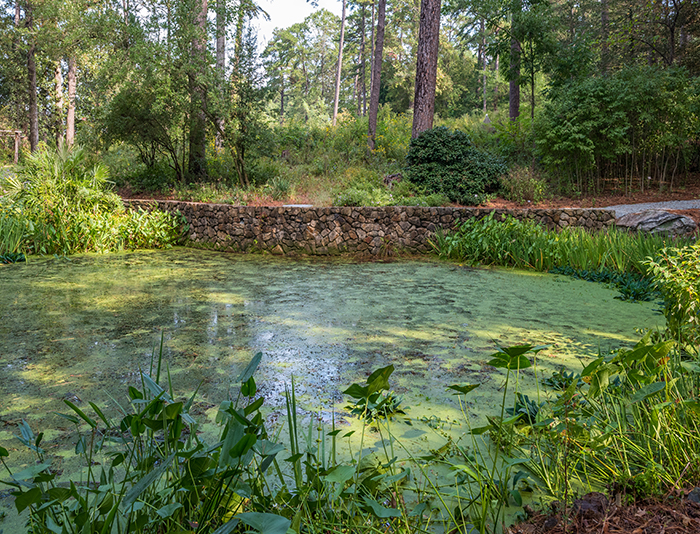