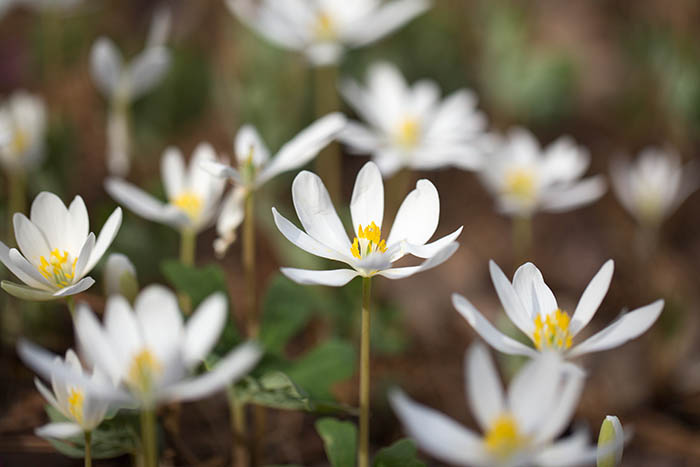 The Blomquist Garden Bursts into Life

Each year visitors make a pilgrimage to the Blomquist Garden of Native Plants to savor the “spring ephemerals.” These indigenous wild flowers, unique to the woodlands of the eastern United States and once commonplace in our local woods, are now in decline, most often due to habitat destruction. Gardens such as the Blomquist offer an opportunity to see these delightful wild flowers in an environment where they are protected. This spring has been like no other in my 10 years of working at the garden. The quantity of spring ephemerals erupting from the earth after having lain dormant as seeds in the soil for perhaps decades is astounding. I rarely use the term “awesome” but I think the abundance of flowers this year justifies its use this one time!

As winter draws to a close the days become longer and warmer, culminating in a “quickening” of the earth, when life in the soil is activated and plant growth stimulated. These captivating wild flowers, (the majority of which are “geophytes.” possessing underground storage organs such as bulbs or tubers), have the immediate energy to respond to these environmental signals to quickly emerge, grow and form flowers before the deciduous tree canopy closes in overhead, reducing access to light. 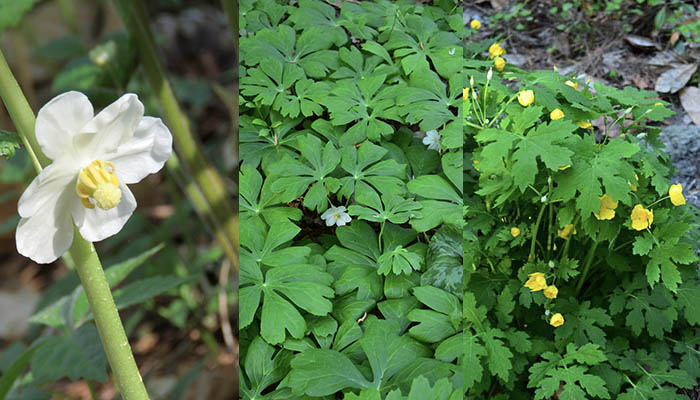 The harbinger of spring in the Blomquist Garden is the dainty trout lily (Erythronium americanum). We have seen this plant in flower as early as late February, but most often it is at its best in mid-March. This early perennial is quickly followed by spring beauty (Claytonia virginica), and my favorite spring ephemeral, the delicate rue anemone (Thalictrum thalictroides), which has been blooming in the Blomquist for almost four weeks and still remains impressive. Then we have the gorgeous bloodroot (Sanguinaria canadensis), with its simple pure white petals and yellow center; once pollinated the petals are quickly lost, but the gray-green foliage persists well into early summer. 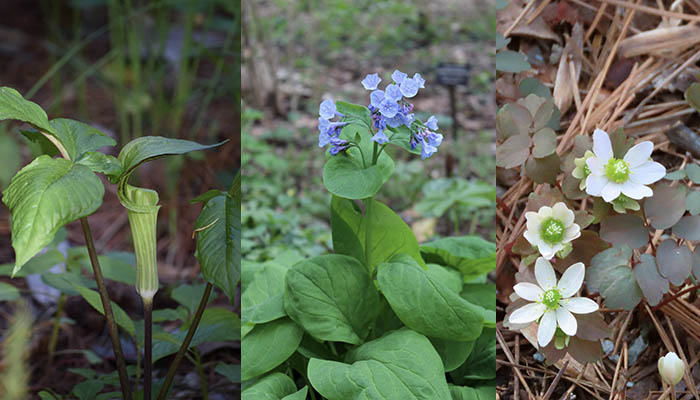 In late March this smaller group of perennials is followed by Virginia bluebells (Mertensia virginica) and the celandine poppy (Stylophorum diphyllum). The powder blue of the bluebell is a pleasing complement to the vivid yellow of the celandine poppy, but be warned that both of these plants appreciate moist soil and can thrive to an aggressive degree in a small garden. Added to this group is the mayapple (Podophyllum peltatum), a truly distinctive native plant but also one that likes to colonize.

The Dicentra species—the wild bleeding heart (D. eximia) and Dutchman’s breeches (D. cucullaria)—with their fern-like foliage, add a filigree-like texture to the woodland floor tapestry. Many common plant names simply describe a plant—for example, the Virginia bluebell—but I suspect many modern and stylish Dutchmen would look quizzically at the shape of the flowers of Dutchman’s breeches.

There are more spring ephemerals that I haven’t highlighted—just this week we have seen Jack in the pulpit (Arisaema triphyllum) and Solomon’s seal (Polygonatum biflorum) pushing up through the soil and starting to form flowers—and I purposely avoided writing about the more than 20 Trillium species we have represented in the garden, as this group of plants deserves an article of its own.

Suffice it to say, it is a magical time in the Blomquist Garden of Native Plants.