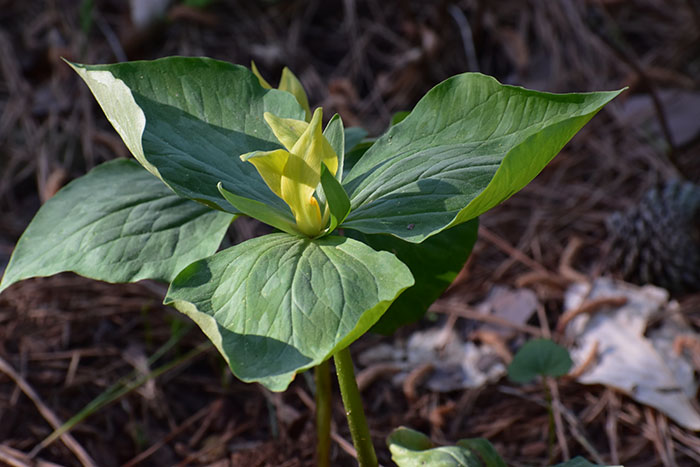 Every year from late February until early May, wave after wave of flowers emerge from the forest floor, blanketing North Carolina slopes and stream banks like a living carpet. Collectively known as spring ephemerals, these native perennial woodland wildflowers take advantage of the lag between the onset of warmer weather and the unfolding of the leaves in the tree canopy that reduces the sunlight throughout the summer.

Unlike many groupings of plants, which are genetically related or have similar flower structures, spring ephemerals come from a wide range of diverse plant families that happen to occupy similar ecological niches. As with daffodils and tulips, spring ephemerals tend to have fleshy tuber or bulb-like structures, which allow them to store food for the long periods of dormancy between growth cycles. Many of these plant species form dense colonies through asexual division, while those that do produce seeds are frequently myrmecochorous, meaning the seeds are dispersed by ants. The seeds are capped with a fleshy, often brightly colored appendage called an elaiosome, which is intended to be food for these unlikely allies. The ant carries the seed to its nest, where the elaiosome is food for its young, the nest being an ideal place to germinate far from the original colonies. 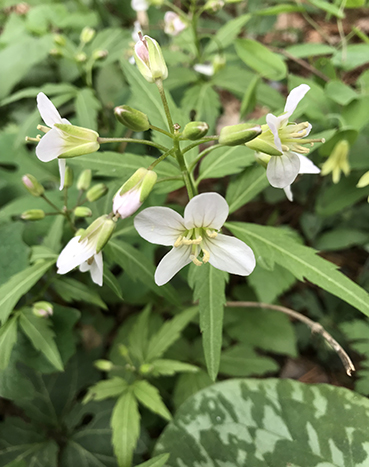 Among the first species to emerge each year are the trout lilies (Erythronium spp.), easily identifiable by the single flower dangling upside-down on a long stalk emerging between two or three simple leaves. Several species are found in North Carolina, including the dimpled trout lily, E. umbilicatum, with green and brown mottled leaves and bright yellow blooms. Next up are the spring beauties (Claytonia virginica), tiny five-petaled white flowers marked with pink, which glow in UV light, attracting early season pollinators such as ground-nesting native sweat and mining bees and the falcate orange tip butterfly (Anthocharis midea).

Other common spring ephemerals include cut leaf toothwort (Cardamine concatenata), a member of the mustard family with an erect stalk of pale four-petaled and heavily dissected leaves; rue-anemone (Thalictrum thalictroides), a buttercup relative with a close look-alike, false rue-anemone (Enemion biternatum); and bloodroot (Sanguinaria canadensis), which sports a distinctive kidney-shaped leaf that circles the flower stem as it emerges from the ground. While soils in the Piedmont tend to be acidic, areas with a less acidic or neutral pH are frequently host to the aptly named Dutchman’s breeches (Dicentra cucullaria), a native relative of bleeding-hearts, as well as many different species of trilliums (Trillium spp.). Later in the season, you'll find the aptly-named Virginia bluebells (Mertensia virginica), with bright pink buds and deep blue flowers. All of these and more can be found within the Blomquist Garden of Native Plants, including many species with a limited native range in the wild that are rarely grown in cultivation.

Packing an entire season’s worth of growth into just a few short weeks doesn’t come without trade-offs—the life cycle of spring ephemerals makes them especially vulnerable to disturbances during their brief blooming period. A warming climate means that forests are leafing out earlier than in the past, which may have long-term implications for these plants’ continued survival. But their biggest challenges are habitat destruction as more forests are cleared for development, hungry deer looking for food after a long winter, and being trampled by overeager or careless humans and their pets.

Because spring ephemerals operate on a limited energy budget, typically producing only one or two leaves every year, even minor damage can seriously hobble their growth and reproduction well into the future. The best way to protect these plants is to admire them from a safe distance by keeping everyone, especially pets and young children, on established paths, and encouraging others to do the same.

As the leaves emerge in the canopy above them each year, the spring ephemerals die back and go dormant as the amount sunlight reaching the forest floor gradually dwindles. By early summer, the ground is almost completely shaded and little evidence remains of the colorful display that has retreated underground once more, waiting for the following spring to return and begin the cycle anew. 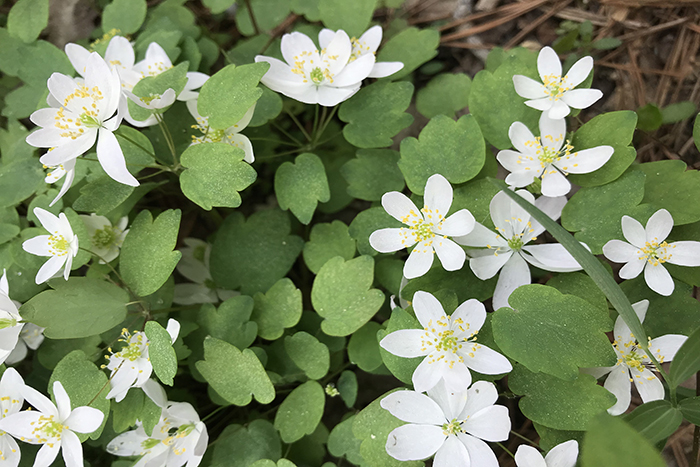