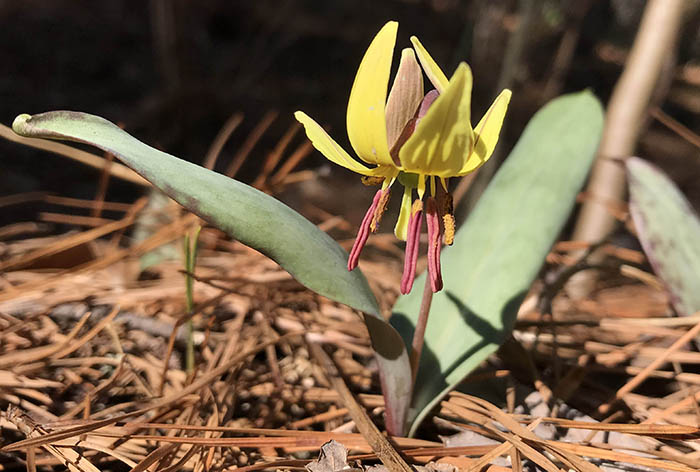 In this series, the staff of Duke Gardens highlights plants you’ll find within our 55-acre living collection. This week assistant horticulturist Laura Daly features a lovely little native plant that is easily overlooked in the wild. 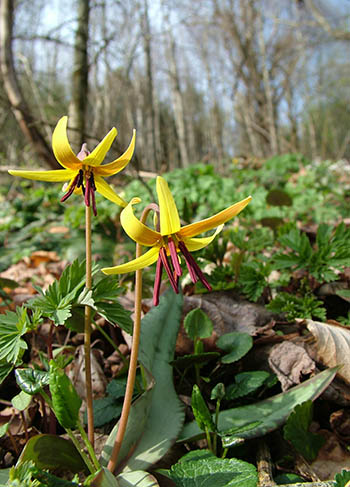 If you have a keen eye and a slow step as you are wandering the woods in mid-February through early April, you might be lucky enough to spot one of my favorite spring ephemerals. You have to pay mind, though, that this beauty consists of only one to two basal leaves and a short single-flowered stalk standing 6 inches tall. Its nodding flower has yellow reflexed petals that expose six long red stamens, and it is simply breathtaking against a still bare deciduous canopy, particularly if you lie down to look at it from below.

This plant is known by many names: trout lily, fawn lily, adder’s-tongue, and dogtooth violet. But why so many?

The name dogtooth violet was brought over with the Europeans, where their common trout lily, Erythronium dens-canis, has violet flowers. Dogtooth alludes to the fang-like white underground bulb from which the leaf and flowers emerge.

John Burroughs, a 19th century American writer-naturalist, opted to call it fawn lily instead, as he detested the name dogtooth violet. He thought the leaves of this plant “stand up like fawn’s ears, and this feature, with its recurved petals, gives it an alert, wide-awake look.” After a quick once over of the 2.5- to 6-inch leaves, elliptic-lanceolate in shape, with their smooth margins, there’s no questioning that the mottled pale green and brown spots resemble both trout and fawns.

Last but not least, the name adder’s-tongue is said to refer to the pointed leaf tips that curl as they arise from the soil, as well as the six long reddish stamens that support jostling anthers resembling a serpent.

Trout lily quickly emerges in early spring before the leaf canopy closes overhead and energy-giving light levels drop. This is true of many other early woodland wildflowers found amongst the deciduous woodlands – such as trillium, bloodroot, hepatica, anemone, and bellwort. A mere six weeks after they leaf out, their above-ground parts wither into yellow stalks, leaving hardly a trace to the casual visitor. For these ephemerals, life is a sprint through these bright but fickle months. When the hardwood canopy closes, they revert to underground tubers for 46 weeks of dormancy. But do not fret, they come back, and they do so in numbers! These colony-forming perennials will delight you every spring, and leave you wondering where they might make their next debut. 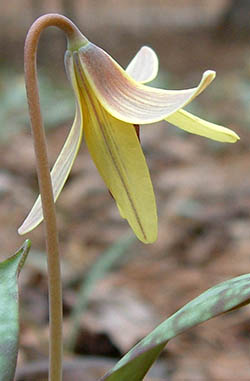 Since trout lilies are early bloomers, they are tremendously important for our pollinating partners that are just waking up from winter’s nap. They usually seduce bumblebee queens, the only hive member that overwinters. Species of mason bees and andrenid bees have also been found harvesting nectar and pollen from trout lily flowers.

After pollination, the ephemerals hastily set seed. The seeds of trout lily are dispersed by ants, which are drawn in by a lipid and protein rich appendage on seeds called an elaiosome. Out of convenience, they bring the entire seed back to the colony, fortuitously planting it in a patch of newly aerated soil.

In order to see this ephemeral’s wonderful forms and stages, look and walk in the woods with regularity over the next couple of weeks. Though not necessarily in their ideal rich cove habitat, representatives of many of these species can be found at Duke Gardens. When you visit them, take a moment to marvel at how these exquisite little flowers are a small part of the whole picture.