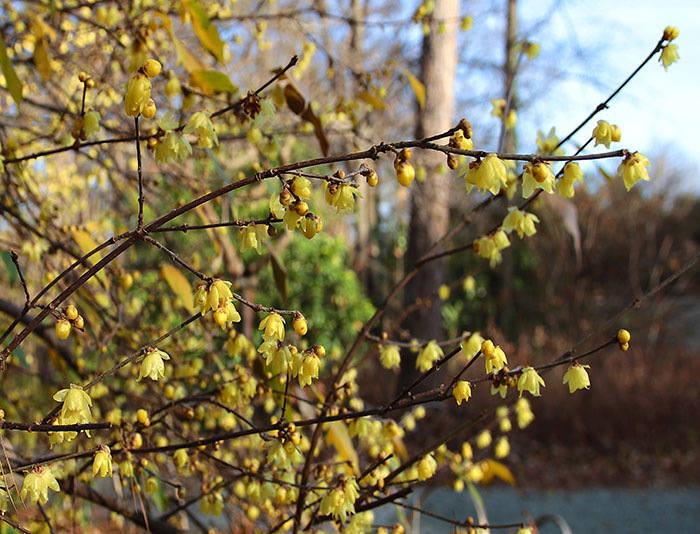 Rightly celebrated for their beauty during what can otherwise be a gray and drab time of year, many winter-blooming woody trees and shrubs are equally noteworthy for their pleasant scents. Here are a handful worth sniffing out this season during your next visit to Duke Gardens. 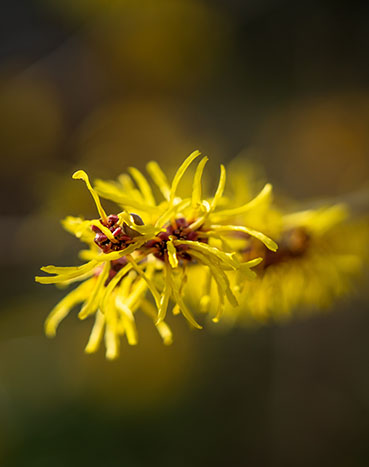 Wintersweet (Chimonanthus praecox) sports dangling, bell-shaped yellow blossoms along its bare branches—and, true to their name, are delightfully fragrant. You’ll find Chinese native shrub growing in the Culberson Asiatic Arboretum, where it has been blooming earlier and earlier each year. Wintersweet is related to the eastern sweetshrub (Calycanthus floridus) in the Blomquist Garden of Native Plants, which is also heavily scented but blooms in April and May. Wintersweet is also frequently mistaken on paper for another North American native shrub with a similar-sounding Latin name—Chionanthus virginicus, the white fringe-tree—but the two are completely different in every other respect.

Though witch hazels (Hamamelis spp.) have relatively small and drab brown flowers, they make up for it with a halo of sunny, strap-like bracts around each bloom, as well as with their distinctive scent. While the native American witch hazel (H. virginiana) blooms in the fall, other members of this genus bloom in late winter and early spring. The showiest plants are cultivars of the hybrid witch hazel (H. × intermedia), a cross between the Japanese witch hazel (H. japonica) and the Chinese witch hazel (H. mollis), and may have bright orange, red, or unusually twisted bracts in lieu of the more common bright yellow. Look for them in the Culberson Asiatic Arboretum during February and March.

Paperbush (Edgeworthia chrysantha) is easy to identify at a distance, thanks to its distinctive golden flowers, which bloom in dense clusters at the tips of otherwise bare branches. Their strong scent is equally unmistakable, making them an excellent specimen or patio plant. Members of the Mezereum family, or Thymelaeaceae, these plants are closely related to another fragrant beauty, variegated winter daphne (D. odora ‘Aureomarginata’), which grows nearby in the Kathleen Smith Moss Garden in the Culberson Asiatic Arboretum and in the Historic Gardens.

Unfortunately, scent is a sense that translates poorly to written and visual media—difficult to describe outside of generalities and analogies and best experienced in person for the full effect. So, come out, follow your nose, and let us know which one is your favorite! 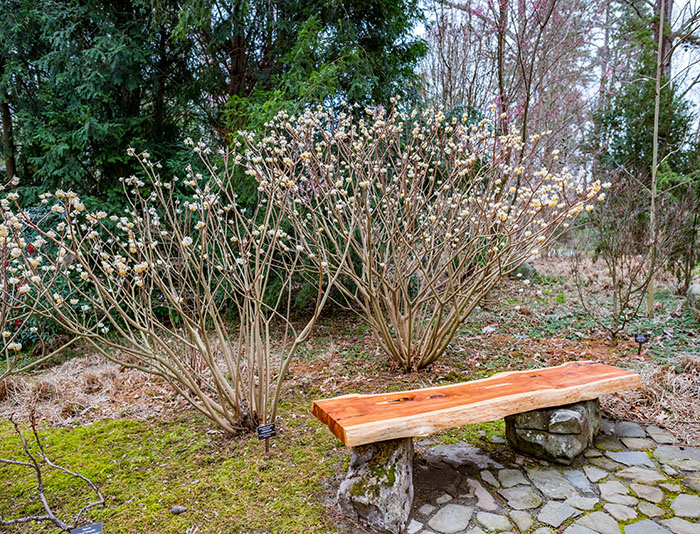