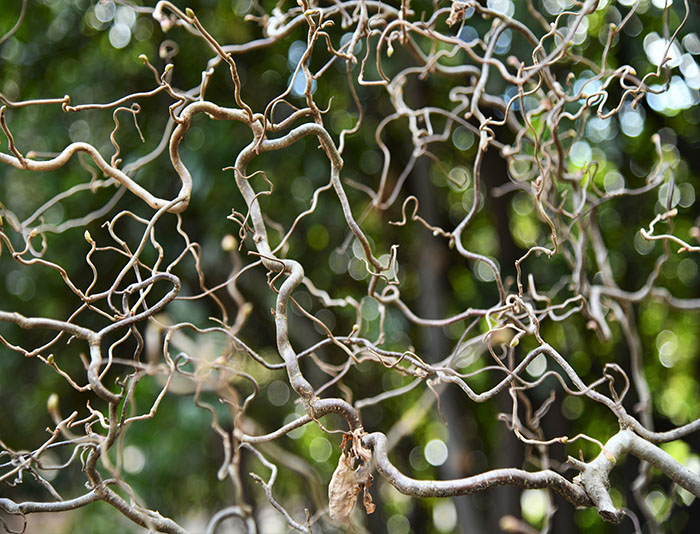 In this series, the staff of Duke Gardens highlights plants you’ll find within our 55-acre living collection. This week, marketing and communications assistant Katherine Hale discusses a shrub with a showstopping history.

Hazels (Corylus spp.) have a long history of human cultivation for their edible nuts and their use in hedgerows, agricultural fencing, and traditional coppice forestry. This includes our native American hazelnut (C. americana) and commercial filberts (C. maxima and C. colurna). Several cultivars are grown primarily to address the human need for beauty and entertainment, most notably the corkscrew hazel (C. avellana ‘Contorta’), a selection of the European common hazel with an unlikely role in 20th century vaudeville. 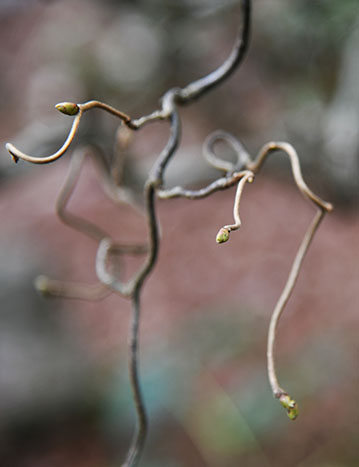 Like many dwarf and unusual-looking cultivars, this variety was discovered as a mutated offshoot of an otherwise ordinary hedgerow hazel in the early 1860s by Henry Nicholson Ellacombe, a clergyman in the Church of England and one of the most noted gardeners of his day. It was further popularized by another Henry—this time, the Scottish singer and comedian Henry "Harry" Lauder—who sported a deliberately crooked cromach, or walking stick, made from the branch of a contorted hazelnut as part of his act along with traditional Highland costumes and songs. Lauder’s popularity in the early 1900s up to World War II was unmatched, and man and shrub became inextricably linked in the minds of gardeners and the general public long after his death in 1950.

"Harry Lauder’s Walking Stick" as this cultivar is commonly known, is usually grafted onto a regular hazel shrub to make a specimen tree; a quick examination of the trunk will reveal the line between the two individual plants. As hazels are prone to forming extensive clonal colonies through their roots, these suckers lack the desired contortions and must be kept continually in check. Occasionally, however, you’ll encounter this cultivar growing directly on its own roots, in which case all of the suckers will be identical offshoots of their curvy parent.

Although a beautiful sight at any time of year, corkscrew hazel is best appreciated in late winter, once the leaves have fallen and exposed the complex twists and turns of its winding branches. In early spring, hazel trees are bedecked with dozens of dangling yellow catkins, which release their pollen on the breeze, while the significantly smaller female flowers are reduced to tiny red tendrils extending from the buds along each branch.

If all the world’s a stage, then Harry Lauder’s walking stick plays a starring role in any garden lucky enough to host it. Look for our specimen along the staircase between the koi pond and the Frances P. Rollins Overlook in the Historic Gardens, with a bench conveniently nearby for you to sit back, relax and enjoy the show! 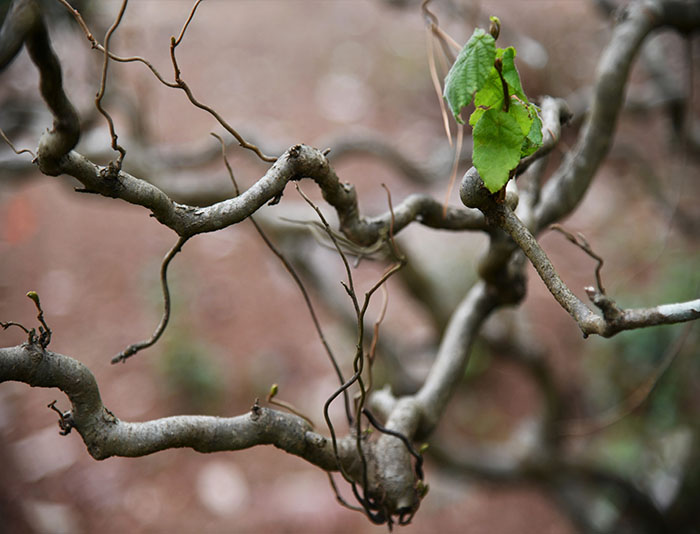