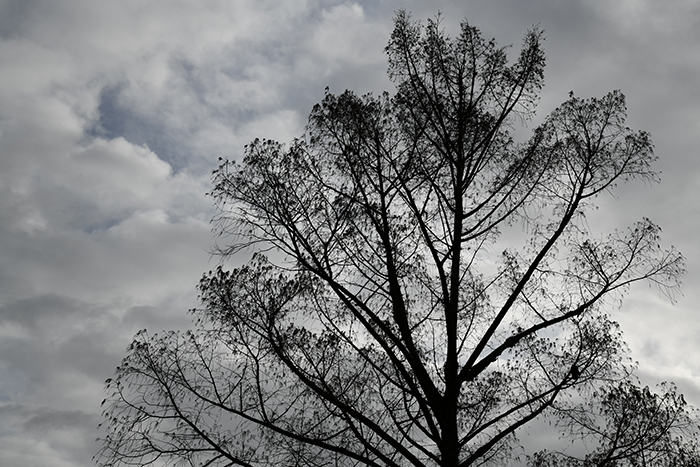 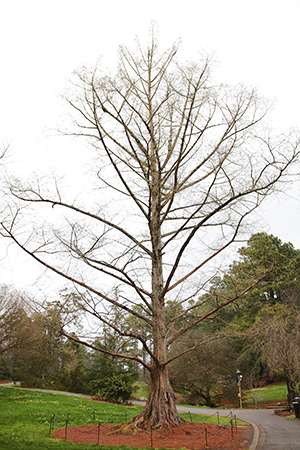 In 1941, Japanese paleobotanist Shigeru Miki published a paper on the leaf imprints of a distinctive new genus of fossil tree, which he named Metasequioa on account of its resemblance to the redwoods and giant sequoias of California. Unbeknownst to him, however, that same year, Chinese forestry professor T. Kan encountered living stands of a similar-looking tree in the Hubei province, known as sui-sa, or water fir, by the locals. However, it wasn’t until after World War II that a group of Chinese scientists published a paper confirming the water fir as a previously unknown species of Metasequioa—a “living fossil” all but identical to specimens from the Cretaceous period.

This discovery sparked intense interest in the international botanical community, with Harvard University’s Arnold Arboretum funding an expedition in 1948 to collect and distribute seeds of this new find to botanical gardens around the world, including Duke Gardens. The original tree grown from seed collected on this expedition still stands in the Historic Gardens between the Terrace Gardens and the Fisher Amphitheater, marked by an informative plaque. Because of its historic significance, the tree’s extensive root system is roped off with a metal chain to prevent well-intentioned visitors from “loving the tree to death” by compacting the soil with their footsteps.

Although they are rare and endangered in their native habitat, dawn redwoods have been widely planted elsewhere thanks to their quick growth, their tolerance for common hazards like deer, clay, damp soils, and air pollution, and their lack of pests and diseases. Unlike most conifers, which are evergreen, dawn redwoods are deciduous, exposing beautiful pyramidal form with drooping branches in the winter when the branches are bare.

Dawn redwoods are often confused with the native bald cypress (Taxodium distichum), and the two are often planted together in parks and gardens because of their similar habitat requirements. Although the feathery leaves of both species closely resemble each other in appearance, dawn redwoods have larger needles with rounded tips and the needles grow opposite one another, while bald cypress needles are narrower and more pointed and grow in an alternate pattern along the branch. However, bald cypress cones are large bumpy globes, often covered with sticky amber sap, which break up into chunky pieces when the seeds are ready to disperse, while the tiny dawn redwood cones resemble miniature pine cones full of small winged seeds.

While the venerable specimen tree near the Terrace Gardens is the oldest and most conspicuous specimen, there are numerous other dawn redwoods scattered throughout Duke Gardens. A handful of younger dawn redwoods are thriving along the creek bank across the path from the original tree, and there are several labeled specimens in the Culberson Asiatic Arboretum as well. But no matter how old they are or where you find them, all dawn redwoods alive today belong to an ancient lineage stretching back millions of years, a legacy that will hopefully continue well into the future with human assistance. 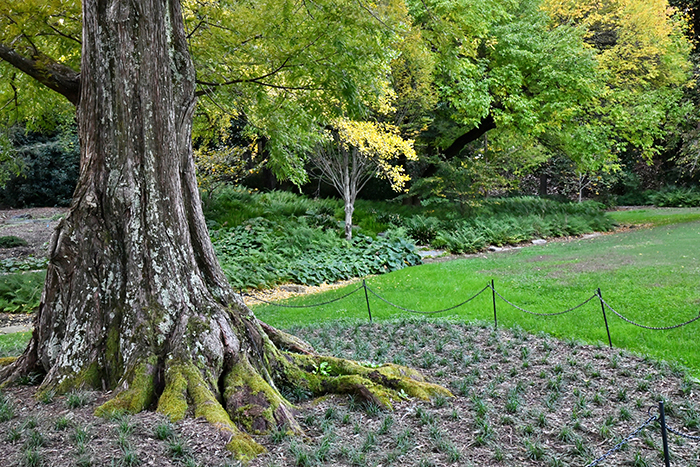